The Torah is written in black fire on white fire.

The Jewish holiday of Shavuot just ended.  There is little debate about its origin as an agricultural festival.  One of its names is The Feast of First Fruits.  It is also The Feast of Weeks, starting the count of seven weeks at Passover.  It is another of the holiday’s names, however, that my painting illustrates: The Giving of the Law (Torah).  There is a vivid verbal description of the event in the Book of Exodus.  I based Revelation at Sinai on the text, and lettered the relevant verses as lava flowing from the space between the tablets that Moses brought from the mountaintop.  (It is the first picture in The Art of the Kabbalah gallery)

No gift was ever bestowed with more fanfare. Storm, earthquake and volcanic eruption combined with a violence that set the standard for all future spectacles.  Mount Sinai quaked and smoked.  Flames spurted from its summit, and trumpets blared.  The sacred words were in the thunder, and, simultaneously, in a whisper within the ear of every person present.

I chose to paint on black paper, forming the Hebrew characters in white.  If you look towards the upper edges of the scene, you can discern the plumes of black fire shining beyond the pale curls of smoke.  And the trailing strands beneath the purplish bulk of the mountain are its roots. I envisioned Mount Sinai levitating from the desert floor, making space for all the words to descend. 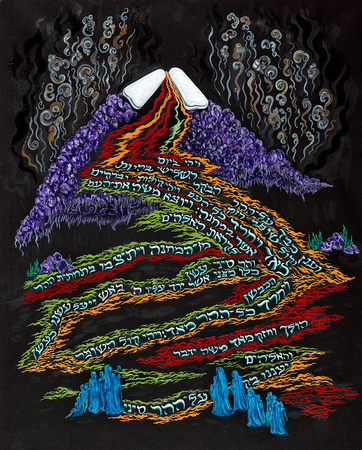