The Persistence of Pluto

Despite my surfeit of stamps, I ordered more first-class domestic postage last month. Views of Our Planets was a series that I could not resist.  In my opinion, the set of eight images is an exemplar of philatelic art.   The eight digitally enhanced planetary portraits fit neatly into a block of stamps.   So it might appear that the postal service did not enter the lists on either side of the controversy about Pluto’s status.

The USPS sidestepped the issue of whether or not Pluto is a planet by issuing a separate set of four stamps, two pairs to a sheet, headed Pluto – Explored!  They depict the New Horizons spacecraft and the orb of Pluto.  The latter image brings to mind some of the marbles that I owned when I was a child.  Ostensibly, it is the scientific achievement of exploring beyond the bounds of the Solar System that the stamps celebrate. 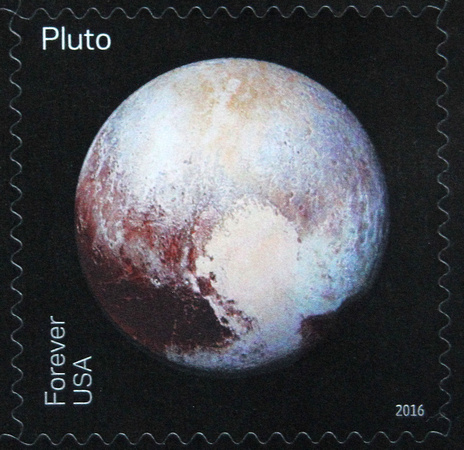 When astronomers demoted Pluto to a dwarf planet, or planetoid, in 2006, I was miffed.  As Pluto rules Scorpio, my Sign, the judgment felt personal.  Doubtless Mars, Scorpio’s co-regent, inspired that perception.  Worse than affronting those born under the Sign of the Scorpion, the revision denigrated the chthonian elements in Nature and in our psyches.  It was an official obeisance to shallowness and complacency, as far as I was concerned.

In retrospect, the alteration in nomenclature was characteristic of the heedless boom time that was to end with a resounding crash.  Now the darkness has reentered minds and hearts, and there is widespread dread of the future. The transforming force of The Lord of the Underworld cannot be gainsaid.  Astrologers, of course, did not misjudge or mislabel Pluto.  Without the Shadow, our vision is partial at best.  As New Horizons flies into the blackness between the stars, Pluto remains the ninth planet, distant and more obscure than our inner depths.