It was in Budapest that HL and I met our ship, the M/S River Aria.  HL had arranged in advance for a cab to convey us from the airport to the dock on the Danube, which bisects the city into Buda and Pest.  The Aria was anchored below the hilly, Buda side, where the palace and its cathedral are situated.  All of the cities along The Danube seem to have begun as defensible fortresses on the available riparian heights.  Pest developed later, and the Chain Bridge did not join the genteel Buda to the more bourgeois, bustling town on the flat side of the river until 1849. 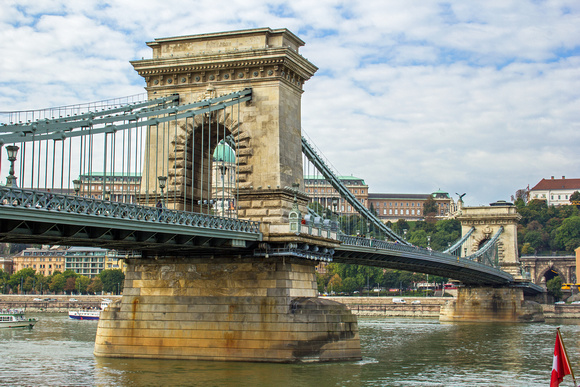 I am still dreaming about the ship.  I had been concerned that our cabin would induce claustrophobia, but HL and I adjusted to its confines with alacrity.  It was, however, odd for us to sleep in narrow twin beds separated by a table supported by a cylindrical, brass-clad leg.  Though the table's edges were rounded, each of us bumped our legs on it occasionally when we rose, groggily, during the nights.  The ship's lounge, upper deck, and dining room were spacious, by contrast, and immaculate.  Railings and woodwork gleamed, polished by the indefatigable crew.  The windows in the lounge and dining room reached almost from floor to ceiling, affording us views of The Danube throughout the cruise.  In Budapest, the river was green.  Evidently, Strauss was somewhere else along The Danube when he named his famous waltz. 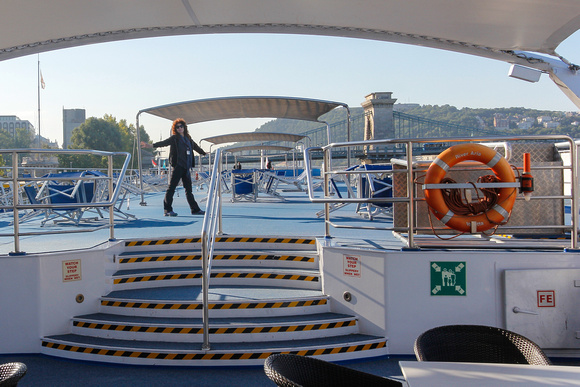 The Upper Deck of the M/S Aria, with the Chain Bridge in the background

Here I am on the Upper Deck of the M/S Aria, with the Chain Bridge in the background.