I was a small girl in New York when my mother took me to a children's matinee performance of Peter Pan.  It was my first time in a theater.  I was enthralled by the actors on the stage, their costumes, their voices, and their general magnificence.  One of the principal characters, however, appeared only as a moving light and a pealing of bells.  That was the fairy, Tinkerbell.

At one point in the story, Tinkerbell rescued her comrades but was hurt badly in the process.  The circle of light that was the fairy dimmed, and Peter Pan turned to the audience in desperation. Tinkerbell was so weak that, unless all of us helped her, she would die.  We might save her if we clapped to show how much we cared about her.  All of the children complied readily, as did some of the adults.  Yet the applause was insufficient.  Peter Pan admonished us to clap harder.  The fairy's light was a mere glow by then, and we clapped with all our might.  Even the parents who had been aloof at first added their efforts.  Finally, the light brightened, and a bell chimed faintly; Tinkerbell would live.  Throughout the theater, programs fluttered from the collective sigh of relief.

My daughter K. was introduced to Barrie's classic opus in its Disney version, as is true of most children in my generation and subsequent ones.  Petite, blond K. had enough of a resemblance to Tinkerbell in the Disney animation to inspire her to dress as the spiteful fairy on more than one Hallowe'en.  Now my daughter has leukemia, incredibly, again.  She survived it as a very young child.  Her forty-third birthday is near, and the disease has dimmed her light.  Clap for Tinkerbell, please, as loudly as you can;  her mother thanks you in advance. 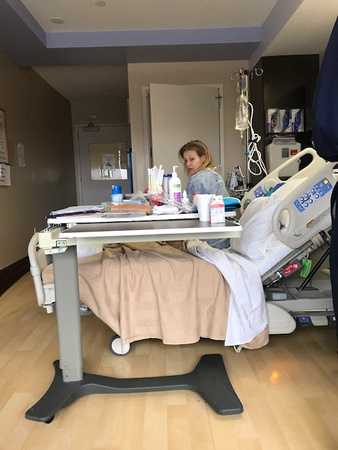 This is one of the pictures that I took in the hospital.  There are more like this, but one will suffice here.