Current Events 8: Between Buda and Pest by Night

My second night aboard ship provided me with my first unique cruising memory, Budapest by Night.  At the beginning of the nocturnal excursion, HL and I stood on the M/S Aria's upper deck.  The ship moved away from its dock in the heart of the city, so smoothly that we remained balanced on our feet.  It sailed under the nearby Chain Bridge, where the road bed and cables blazed with lights.  Then it passed the domed Hungarian Parliament Building that is featured in every panorama of Budapest.  The Parliament was blocks long, and seemed to float in an amber glow.  Plumes of birds  circled the lights trained on the sandcastle-like façade, spiraling high above the towers into the sable sky.  I asked several people what kind of birds they were, but no one, not even the guides, seemed to know.  I assumed that the birds were related to nighthawks.  The tour guides referred to them as Parliament Bats.  Later research, admittedly sketchy, failed to yield a more satisfactory answer.  Please write to enlighten me if you are in possession of this scrap of information. 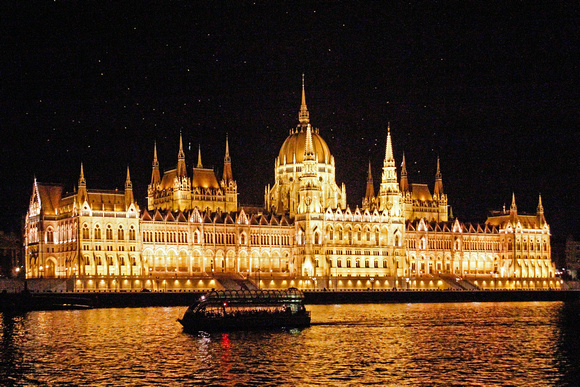 The Parliament of Hungary, on the Pest bank of The Danube

The Chain Bridge at the Buda side of The Danube, in front of the old Royal Palace.  Now  the castle complex houses the Hungarian National Gallery and the Budapest Museum of History. 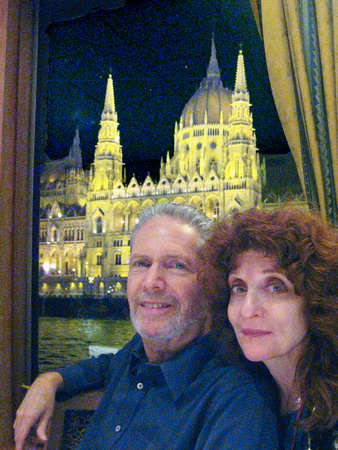 We sat in the lounge, at a picture window, as the ship made its way back to the dock.