The guides procured tram tickets for us so that we could explore some of Budapest on our own, and HL and I were among those who went to the Great Market Hall.  The three-story structure was another fin-de-siècle ornament to the city. Its roof was decorated with Zsolnay tiles in a green and orange diamond pattern.  Inside, the ground floor was filled with rows of stalls selling Tokay and Egri Bikaver, or Bull's Blood, wine, as well as palinka, an incendiary fruit brandy, meats, cheeses, produce, and the inevitable paprika in all its varieties.  The food vendors were quite unfriendly.  One woman ignored me even after I had selected some of her wares, so I left her stall without buying anything and moved to another stall with similar offerings.  I do not require effusiveness from a merchant, but indifference tinged with hostility does not loosen my purse strings. 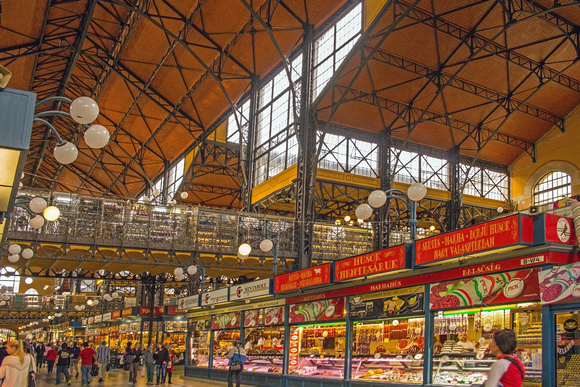 Local residents, not just tourists, were shopping.  The vast market hall was almost empty on that Monday afternoon.  Some of the stalls were closing as HL and I ascended an iron staircase to the second floor, which is the first floor by European count, in search of souvenirs.  I purchased a small porcelain doll in Hungarian folk costume for our granddaughter, from a young man who actually smiled at me.  He was kind enough to encase the doll in bubble wrap.  I was able to buy postcards, too.  I can never have too many postcards. 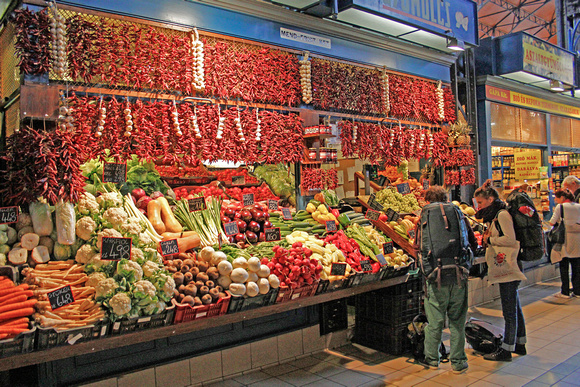 Adjacent to the Market Hall is the Art Nouveau-style Liberty Bridge.  It, too, was constructed for the 1896 Millennium World Exhibit.  It rests on two massive pillars, and was designed to look like a chain suspension bridge even though it is a steel-trussed cantilever span.  It is topped by two pairs of eagle-like Turul birds.  The Turul is the ancestor of the seven tribes who settled on the Hungarian plain, according to Magyar mythology.  The bridge's iron girders are painted green.  I thought it the handsomest of the bridges linking Buda to Pest.  Like the others, it was destroyed by Allied bombing, and was reconstructed after World War II. 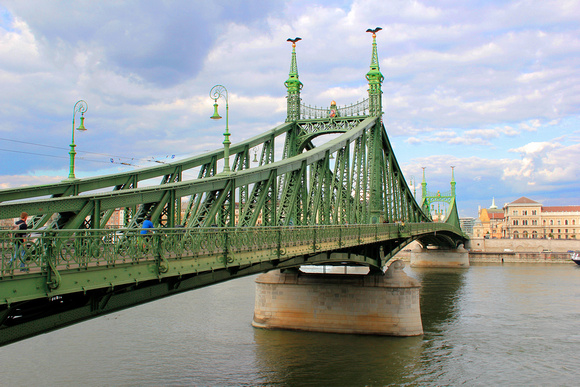