The Great Synagogue of Budapest opened in 1859, during a period of official toleration.  The Moorish style was in vogue among synagogue builders of that time. We have many photographs of the interior, painted lavishly with symmetrical designs reminiscent of Spain's Alhambra.  The walls and ceilings, and even the undersides of the two levels of women's galleries, are covered in the same intricate geometric pattern based on the Star of David.  Whatever is not painted is gilded, sculpted, or inlaid. 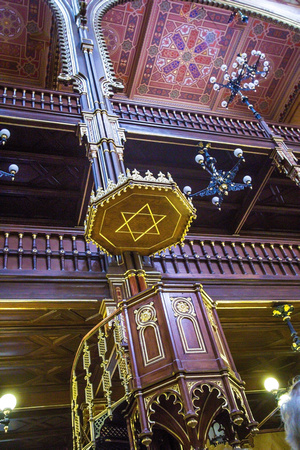 We had to pass through a secure checkpoint in order to gain admittance to the Dohany complex.  The guards at the gate took their job seriously.  We took seats on the main, that is, the men's floor, and listened to our guide's explanation of the synagogue's features.  Our guide and her family belonged to the Dohany.  The synagogue seats almost 3,000 but it might hold twice that number during the High Holy Days.  The Torah ark was housed  at the end of the central nave where an imposing, church-like altar stood under a dome.  It was flanked by the pipes of a huge organ.  The pipe organ was an anomaly, as there was no instrumental music in traditional European synagogues.  Liszt and Saint-Saens were among the notable performers who had played the original organ in the Dohany's glory days.  The organ had been replaced in the 1990's,  after the end of what our guides persisted in calling "the Communism".

There were few other tour groups in the vast sanctuary.  In seats near ours were some Jews who were obviously from The States, shepherded by a rabbi from their home congregation.  Otherwise, people entered singly or in pairs.  Even more impressive than the opulent decoration and the size of the edifice was the fact that all of it had been restored.  It was marvelous that it had been built the first time.  That it had been reared from its wreckage, Phoenix-like, seemed nothing short of miraculous.  I was to experience a similar awe throughout Eastern Europe, where bridges and entire districts demolished by bombings have been restored to their former magnificence. 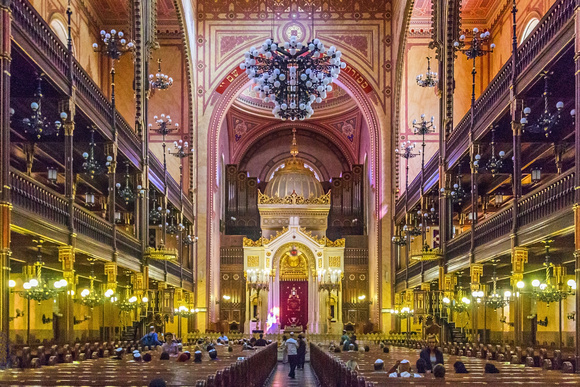