We consulted a map before setting out for the Opera House, a landmark that we had glimpsed during the previous day's city bus tour.  We strolled on Andrassy Avenue, a wide, tree-shaded thoroughfare modeled on the Avenue des Champs-Elysees in Paris, past elegant shops, neo-Renaissance mansions, and sidewalk cafes.  Youths on skateboards slipped past chic pedestrians walking their pedigreed dogs.  The afternoon was warm, and Summer flowers still overflowed from sidewalk planters.  We window-shopped, admiring the displays, until we caught sight of the Hungarian State Opera House.  The English-language tour had just left the lobby.  We begged the ticket seller to allow us to join it, rather than wait an additional hour for the next one.  The woman agreed, and, dutifully, we followed a university student tour leader into the opulent theater.

With M. on Andrassy Avenue, Budapest

Our solemn young guide repeated the anecdote about the Opera House that we had heard during our bus tour the previous day:  Emperor Franz Joseph of Austria had given the Budapest authorities permission to erect an opera house, provided that it was smaller than the one that he had commissioned for Vienna, the imperial capital.  When the Emperor attended the opera in Budapest for the first and only time, he is reported to have lamented that he should have stipulated, additionally, that the Opera House there not be better than the one in Vienna.  Truly, it was gorgeous, with noble oak paneling, scarlet velvet draperies, grand staircases, and gilded vaulting between Neoclassical ceiling frescoes painted by Hungary's leading Belle Epoque artists. 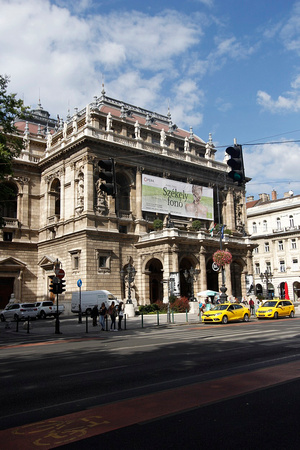 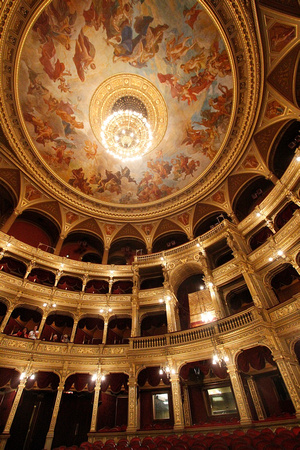