I wished that we could spend another week in Budapest, but we had to return to the ship on our second night there to begin sailing south on The Danube.   The crew imparted, reluctantly, that we would have to rise from bed whenever the ship reached the Hungarian border at Mohacs.  There, Hungarian border control agents would board the ship, and check our passport pictures against our bleary countenances.  It made no sense to me, because we were leaving the country.   No one had seemed to care when HL and I had sallied forth from the Budapest airport to the taxi queue  without a nod to Customs. 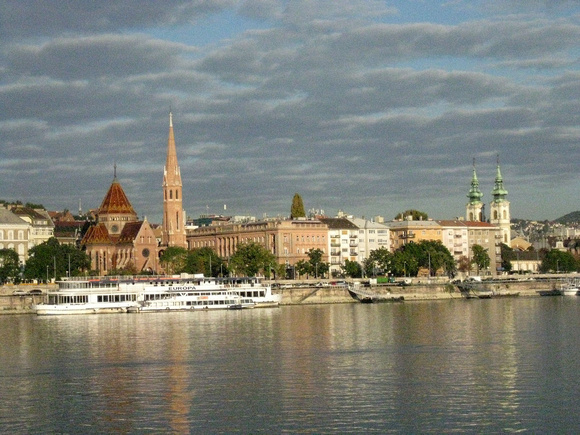 I asked a crew member what he thought  the reason for the "face check" might be.  They want to show their power, the young man grumbled, and his colleague concurred.  Almost all of the crew members were from The Balkans,  rather than Hungary.  In fact, there were only two Hungarians in the crew, the head chef and the captain.  They were so esteemed, or so essential to the crew's welfare, that they escaped the opprobrium generated by their Magyar countrymen.

View of the Buda side of The Danube, Budapest

So it was that the pajama party on the M/S Aria commenced before 5 AM.  The passengers, clad in robes and slippers, shuffled to the boarding area of the ship as their hallway numbers were announced over the public address system.  The passengers were not a handsome lot by day, and their having been roused from bed did little to improve their appearance.  Yet I gave them credit for their cheerful dispositions, given the hour.  They were obedient, as North Americans tend to be in encounters with officialdom.

The unsmiling Hungarian border agents wore black uniforms and carried sidearms.  They gave my passport, and me, a desultory glance.  I was not inclined to make conversation.  The whole procedure seemed pointless, surreal;  there in Eastern Europe, it was impossible for me to resist calling it Kafkaesque.  I looked outside and saw the lit windows of the Mohacs inspection station on the other side of the river.  Otherwise, the night was black, with no lights in the surrounding countryside or on the waterway.  The ship was docked at Mohacs for long enough for me to fall asleep back in my cabin.  When I awoke, we were in Croatia.