The tour company touted a home-hosted (sic)  lunch as a special feature.  HL and I had been apprehensive about this lunch from the first moment that we had read about it in the itinerary.  We were reluctant to inflict our vegetarian requirements on a stranger who cooked for tourists in her home.   We had told Radi the Guide that it might be best if HL and I skipped that part of the program.  Radi assured us, however, that one of the hosts prepared meals routinely for those with special diets.  Our busload of forty was subdivided into five groups of eight.  The bus brought us into a village with a few streets of neat stucco houses, most white, others painted pale lavender, yellow, or green.  All of the houses backed onto spacious gardens, with fruit trees and grape arbors.

The village was name Bileje (Bi-LAY-eh), which we were told means "vegetable" in Croatian.  With Miri, Paige, and a few others of our fellow passengers, we  were deposoited at a house where a sturdy blond woman in an apron welcomed us.  She introduced herself as Rejna (RAY-nah).  I judged her to be in her thirties.  Her smooth, pale hair was cut to chin length.  She ushered us into the dining room of her spotless, modern dwelling.  While serving us homemade cherry and walnut brandies, or rakiya, she described renovating and enlarging her house with the help of her boyfriend.  Here, I must inject a word of praise for the custom of preceding a meal with a shot or two of the local equivalent of rakiya in each of the five countries that we visited during the cruise.  It is a great solvent for cultural barriers. 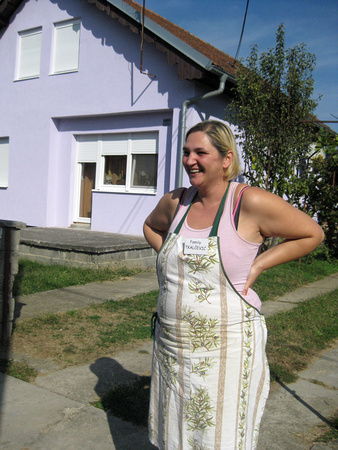 Everyone peppered Rejna with questions about her work and her family.  She apologized for her limited proficiency in English, but she managed to express herself fluently.  She answered all queries amiably while serving platters of food.  Single-handedly, she produced a feast.  She did so five or six times per week during the tourist season, which lasted six months at most.  She had been obliged to procure a license to operate a Bed-and-Breakfast inn in order to be a caterer, even though she did not lodge guests.  Some of her neighbors did run guest houses, patronized in the main by Croats from cities like Osijek who fancied a weekend in the country.  All of the fruits and vegetables for Rejna's dishes came from her garden, or from her relatives' nearby farms.  The meat, I assumed, was from animals raised in their pastures.  The main course was a Croatian specialty, a meat loaf made from beef, pork, and bacon.  The resourceful Rejna gave HL and me a version made with soy.