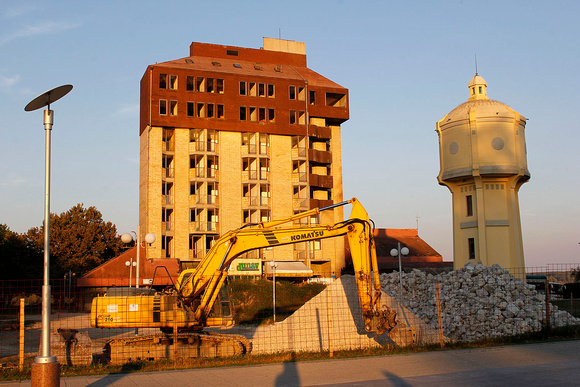 We met our ship at Vukovar, Croatia's largest river port, where The Danube joins The Vuka.  Osijek bore signs of shelling, but Vukovar looked as if it had been deliberately scheduled for demolition by artillery.  It was in such a state of disrepair that it was hard to tell if it were being rebuilt or razed.  There were bulldozers parked behind wire fencing beside some of the ubiquitous piles of rubble.  The name of the town had become synonymous with the carnage of the Yugoslav wars.  Not only had its buildings been destroyed, but also hundreds of its citizens had been massacred after they were captured by Serbian forces.  Those who were alleged to have ordered the killings were tried for war crimes, though that was not an uncommon distinction after the drawing of uneasy new national borders.  Many a soldier in the seven countries created by the dismemberment of Yugoslavia might have inserted "war criminal" as a line in his resume.