It was early evening when HL and I decided to stroll through Vukovar.  Adjacent to the dock was a lawn where what appeared to be an array of stone windows leaned on one another to form a line.  A closer inspector revealed that it was a sculpture of gravestones.  We surmised that it was a war memorial.  A young man in a nearby souvenir stand knew enough English to confirm our guess.  Few from the ship had cared to walk around Vukovar, so the vendor had few prospective customers.  He was unperturbed by my question.  War memorials were more ordinary than fire hydrants in this part of the world.  On the other side of the lawn was some playground equipment and, beyond it, a small school.  It was hours since the pupils had been dismissed, and a boy and a girl had the swings all to themselves.  A man who was probably their father sat on a bench, smoking and watching the children play. 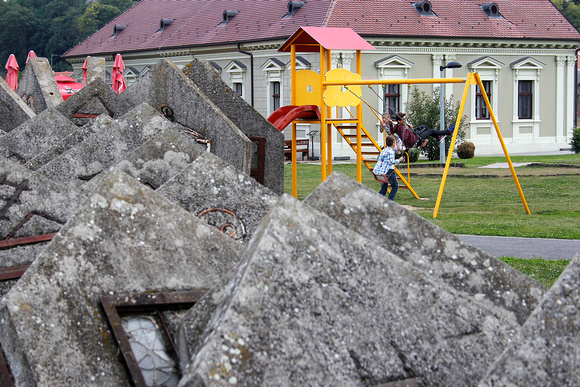 The low, aurous light was perfect for photography.  HL took pictures of forlorn hotels, the solitary tower of a pulverized edifice, and a modern concrete plaza where almost all of the windows were dark and empty, all within a few blocks of the monument.  We continued into the town, to the renovated main area.  The paint was fresh, and the glass in the shop fronts was new, but there were few pedestrians and even fewer cars.  It was so quiet that I was relieved to spot a young couple pushing a toddler in a stroller.  Vukovar was like a town in a fairy tale that had been placed under an enchantment, and all within it were just beginning to stir.  Or it could have been a city ravaged by dragons, and its inhabitants still were not certain that all of the monsters were gone. 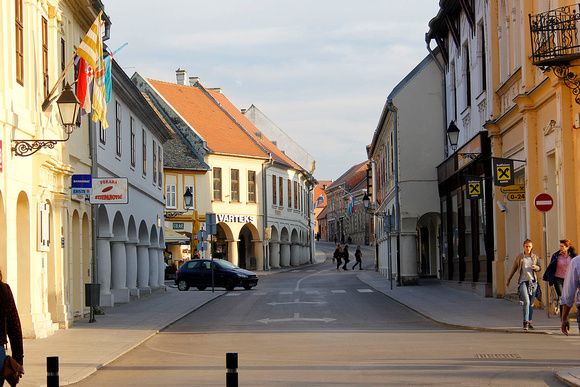