The ship sailed while we slept and we awoke in Serbia, we passengers having been spared the attentions of border control agents.  We had docked in Novi Sad, Serbia's second largest city and the capital of Vojvodina, a northern province classified as semi-autonomous.  Despite my curiosity, I refrained from delving into the intricacies of the place's political status.  Any information elicited from such inquiries is subject to rapid obsolescence in The Balkans.  No matter; the Sun was shining on The Danube and the bridges spanning it. 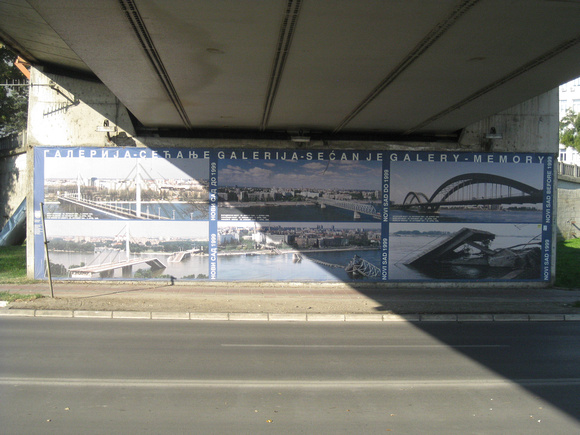 The Bridges of Novi Sad

Our guide for our morning walking tour was Milena, a tall, slender young woman.  That is a poor description, because Serbs are very tall people.  They are also intensely proud, and more than little defensive.  Serbs were cast as the villains in the Domestic War, though I believe that there was blame enough for all of the combatants to share.  The Serbs had dominated Yugoslavia, and many still regard Tito's brand of Communism as superior to any subsequent regime.  Thanks to Tito's deft diplomatic maneuvering, Yugoslavia had received copious foreign aid from both the Soviets and the Western powers.  For four decades, the people had enjoyed secure jobs, medical coverage, free university tuition and vacations abroad.  Western consumer goods had been available, too.  As in other Communist countries, ethnic and religious differences officially were subsumed under the broader identity of the Yugoslavian proletarian paradise.  Soviet troops never occupied Yugoslavia, and the Communist yoke had not weighed heavily on the Serbs' necks.