One might have thought that Tito's memorial would be Belgrade's premier tourist attraction.  That distinction, however, belonged to the Temple of  Saint Saba, the grandest Serbian Orthodox church in The Balkans.  Saint Sava, a medieval prince, had been the first Serbian archbishop.  After canonization, he became the national saint.  His importance increased a few centuries later, when the Ottomans punished rebel Serbian Christians by disinterring the saint's remains, burning them, and scattering the ashes.  The current church was erected on the reputed site of the desecration.  Begun in 1935, the church was a magnificent edifice in the Byzantine style, with white marble walls and a copper dome.  It was situated on an elevated plaza and, according to our guide, was visible from almost everywhere in the city.  It was also unfinished. 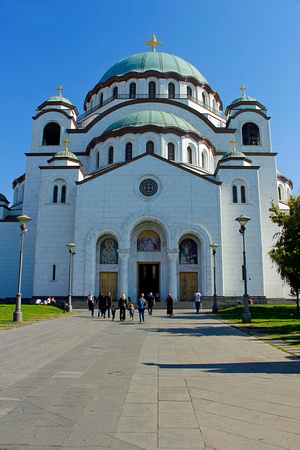 The Temple of Saint Sava