Radi, our guide,  was determined that her tour group should have contact with natives wherever we went. She had arranged for us to hear a local Serb express his feelings about Tito and “The Communism”. He met us outside Tito’s mausoleum. He was a grey-haired man in his seventies named Vasilije Kirkovič. He had spoken to groups led by Radi in the past, and was eager to do it again. Before he could do so, however, a florid, close-shaven man in a uniform, complete with a beret and a row of ribbons on his shirt, began talking to us. He was impressively inebriated, especially as it was not yet noon. Radi translated; the voluble stranger was from Slovenia. His former army comrades and he were having a reunion. They had traveled over five hundred kilometers to Belgrade together. They had come to honor Tito’s memory and, not incidentally, drink to it. He wanted us to know what a great hero Tito had been, and, with drunken persistence, ignored Radi’s attempts to thank him and move us away. When she did succeed, the veteran saluted us crisply, managing to remain vertical in the process.

Kirkovič decried the chaos that had replaced the regulated society in which he came of age. His plaint was not unlike that of blue-collar workers who had belonged to labor unions in The States, before the unions’ power waned. Without university educations, his wife and he had enjoyed job security and a decent standard of living. They had even been able to vacation abroad, owing to Tito’s canny manipulation of both Eastern and Western bloc diplomats. For Kirkovič, the advent of capitalism had fostered anxieties rather than opportunities. It did not matter to him that the workers’ paradise had been financed not only by foreign largesse, but also by loans that Yugoslavia could not repay. He missed Tito, and he was not alone. 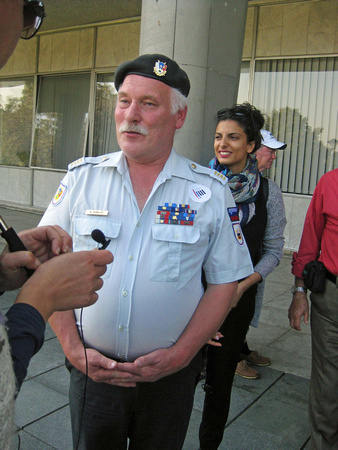 V. Kirkovic described the glorious old days under Tito, with Radi in the background.

The stranger from Slovenia insisted on giving us the benefit of his opinions.
Keywords: cruise, Danube, Serbia, Tito, veterans, Yugoslavia