Current Events 40: The House of Flowers

Nowhere was the Serbian nation's devotion to its former leader more evident than at Marshal Tito's tomb.  Tito was released from his earthly office in 1980.  His mausoleum was set in a sculpture garden atop a wooded, meticulously landscaped hill.  The lush greensward rose towards a rectangular edifice with glass walls.  It was two stories tall, with a partial third story.  A fountain played in the paved courtyard in front of it.  With its stark lines and many windows, the building resembled airport terminals of the same era.  Above the entrance was a black-and-white mural with a trio of soldiers on the left, holding rifles,and three more unarmed soldiers on the right.  This alluded to Tito's military prowess,  He had been a partisan commander during World War II.  He was a hero to the Serbs despite his having been born in Croatia to a Croatian father and a Slovenian mother. 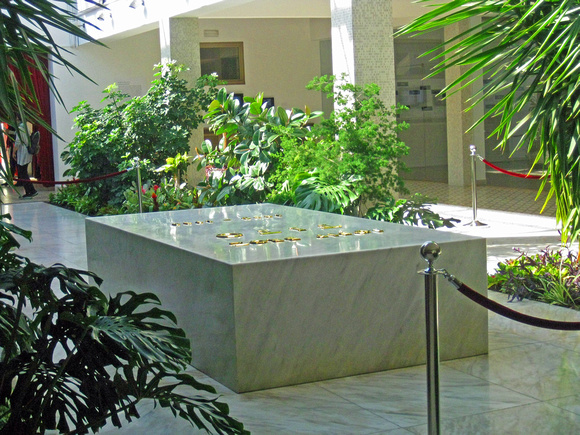 The mausoleum was called The House of Flowers, Kuca Cveca in Serbian.  It was part greenhouse, part tomb, and part museum.  There was nothing gloomy about it.  Josip Broz Tito's marble gravestone lay in the middle of an indoor garden.  The floors were matching white marble.  Tito's third, much younger, wife had joined him in repose in 2013.  Her remains lay under a slab smaller than that for the great man.  The glass roof admitted enough sunlight to illuminate the merest mote of dust, but there was none.  Everything was clean and polished, and looked brand new.  The foliage was as shiny as if every leaf were wiped daily, and that might well have been the case. People queued to pay their respects and then proceeded to glass-walled rooms filled with memorabilia.  There were photographs of Tito with so many dignitaries that I wondered if any head of state, before or since, had maintained relationships with so many premiers, presidents, kings, queens and celebrities.

Tito's ornately carved desk was on display, as were his dress uniforms and medals.  There was an entire room for Tito's collection of batons.  These were the short staffs that relay runners would hand to their teammates in the course of a race.  Socialist countries had promoted athletic events as wholesome leisure activities for proletarian youths, and there was a race every year on Tito's birthday.  The relay winner would present his baton as a gift to Yugoslavia's leader.  It became customary to give Tito decorative batons in tribute at any audience.  Some were carved and painted wood, others pewter or silver.  Some were surmounted with a Socialist star or another figure.  There were shaped like tools or scepters, or topped with flowers, fish, or even a miniature equestrian monument.  The variety was staggering.  The batons demonstrated how the limitations of a form can spur creativity.  Yet, as I gazed at the rows of batons in their neat rows, I had the irreverent thought that they represented a joke that had gone too far.