I was doubly an outsider, a tourist who was also a Jew.  Serbia had been declared Judenfrei by the Nazis and their collaborators after the extermination of over two-thirds of the country's Jews.  Those who escaped the genocide had not fared too badly under Tito, though there were too few of them to revitalize their decimated communities.  The Zionist youth group Hashomer Hatzair (The Young Guard, of which I had been a member in New York), had joined forces with Tito's partisans to help establish the postwar Communist regime.  The Serbian Jews' lot worsened dramatically during the fighting in The Nineties.  International Jewish aid groups organized heroic rescues, allowing Jews from the embattled former Yugoslavia to emigrate to Israel and elsewhere.  There were no more than 2,000 Jews left in all of Serbia, and half of them resided in Belgrade.  The only functioning synagogue in the country was there, and HL and I resolved to visit it.

We were at liberty in central Belgrade until the evening.  HL and I walked as quickly as we could, consulting a rudimentary map.  The synagogue was not far from where the tour buses had left us.  It was not easy to find.  We had to descend a steep staircase past a construction site where extremely noisy machinery was in use.  Then we had to search along an unprepossessing street for the address.  The block seemed a likelier site for a warehouse than a house of worship.  Yet we were in the proper place, thanks to HL's unerring navigational instincts. 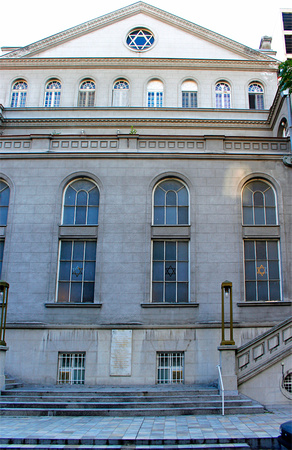 A solid steel fence surmounted with a simple Star of David surrounded the synagogue compound.  If the congregation had wished to escape notice, it had achieved its objective.  The gate was locked.  There was a small booth next to the gate that served as a gatehouse, but there was no response to our knock or raised voices.  Eventually, a uniformed guard materialized, and he communicated to us that the synagogue was closed.  We knew that there were no services scheduled, but we had the name of a caretaker who was supposed to be on the premises.  The guard opened the gate for a woman who was walking a small dog.  She must have been a tenant in one of the apartments across the courtyard from our goal.  With a nod, he guard bade us try our luck at gaining entrance to the synagogue.  Again, I felt the presence of the ghost of Franz Kafka, my steadfast, if disembodied, companion throughout Eastern Europe.