The synagogue was grey and three stories high, with a facade that was bland at first glance, but then resolved itself into a decent example of 1920's Neoclassical design.  It was nowhere near as grand as the synagogue in Novi Sad and almost as deserted.  There was a swing set in the untended courtyard, as well as some weathered stone slabs incised with Hebrew letters, piled against an outer wall of the compound.  Among them was a relief of the Ten Commandments.  We climbed the front staircase and rang the bell.  A short, brisk, middle-aged woman with dark hair showed us into the vestibule.  Though she knew fewer words of English than I did of Serbian, I was able to explain that we were Jews from The States.  The donation that we left in a tzedakah box was an aid to communication. 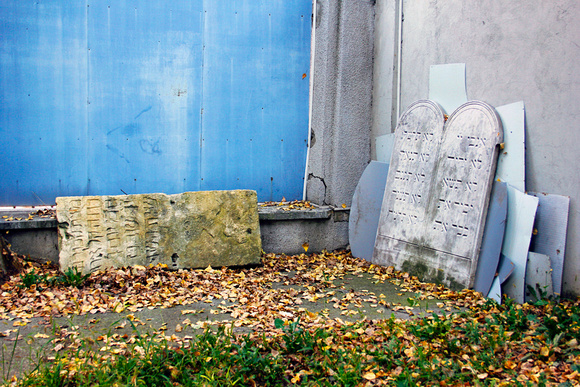 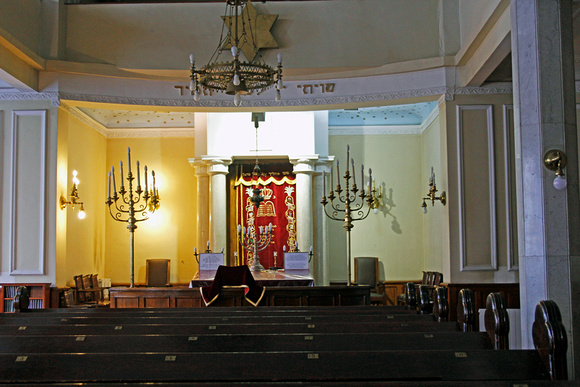 The synagogue was named Sukkat Shalom, that is, Shelter of Peace, an obvious desideratum in a region of such recurrent upheaval.  A plaque beside the door identified the synagogue in Serbian, in Cyrillic letters, and in English as well.  It was not an uncommon name for an American congregation.  Since it had not acquired that appellation until 2002, American sponsors may have suggested it.  Originally, it had been known by its location, as the Kosmajska Street Synagogue.  The Nazis had not had to tax their depraved imaginations for ways to sully it when they occupied Belgrade, but at least they had not razed it as they had other synagogues in the city.  It was cleansed and rededicated after the war.  Both Ashkenazi and Sephardi Torah scrolls were housed in a fine ark ornamented with marble.  Two rows of columns ran the length of the prayer hall, which had a wooden floor inlaid in a pattern of chevrons.  The wooden seats, altar and floor gleamed with polish.  The decor was simple, not unlike that in in older North American synagogues save for a double bench in a corner to the side of the altar.  This was an elaborate version of Elijah's Chair, used during circumcision ceremonies.  It was cushioned in sumptuous blue velvet, a color so rich that even the crimson carpets near the altar looked drab by comparison. 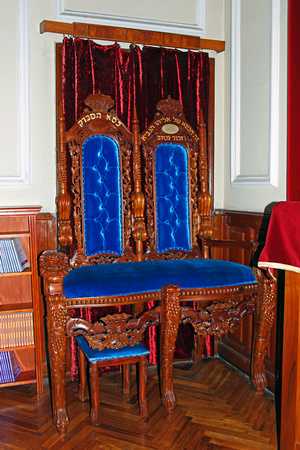