After having breathed the elegaic atmosphere of the synagogue, we were ready to stroll along Knez Mihailov, or Prince Michael, Street, Belgrade's main pedestrian thoroughfare.  A handsome bronze equestrian statue of the eponymous prince dominated Republic Square, the center of the city.  Prince Michael had been the ruler when the Turks finally decamped from Serbia in the late Nineteenth Century.  The wide street had been turned into a mall, and it was lined with shops and cafés.  International brands of luxury goods were well represented on both sides.  There were also kiosks in the middle of the street, selling periodicals,  souvenirs, and refreshments.  Reading, apparently, was far from obsolete in the White City. 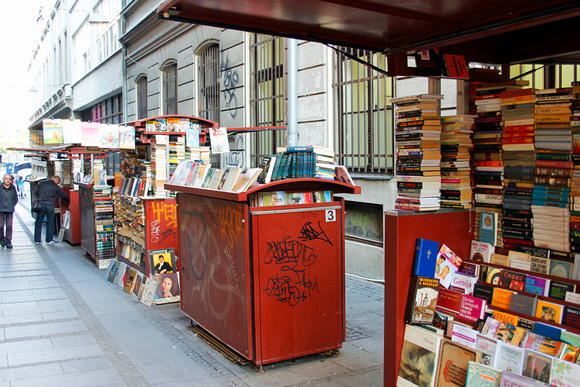 We passed used booksellers' stalls and several bookstores.  The window of Plato's Bookstore displayed a variety of T-shirts printed with anti-American and anti-capitalist slogans.  Naturally, we had to go inside.  There we found more merchandise  that demonstrated that not all Serbians had been converted to soi-disant Western democracy.  T-shirts sold at the kiosks were even more emphatic.  One could choose apparel, mugs or magnets bearing the image of any one of several past dictators and current local demagogues.  I bought a postcard that denigrated Coca-Cola, not sparing the profanity, and praised slivovitz, presumably the proper beverage for Serbian patriots.  There was a T-shirt imprinted with the same sentiment on offer.  Had I been able to think of anyone who might wear such a gift, I might have bought the shirt. 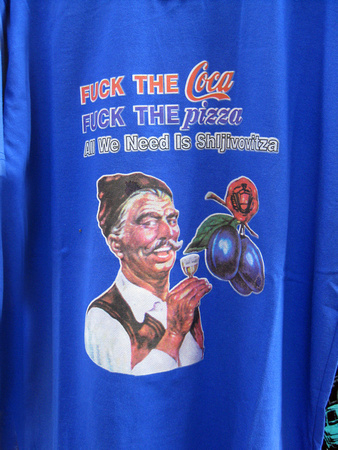