For our final evening in Bucharest, Simona invited us to dinner at her home.  Her house was far from the city center, in a newish neighborhood where every residence had been custom-built on a private lot.  Simona's house was spacious and modern, furnished handsomely.  There were Oriental rugs on the tiled floors, and a grand piano in the main room.  There were picture windows facing the back of the property.  The long dining table was set, and the delicious aroma of baking filled the air.

Simona exhorted us all to try the national spirit, a beverage called ţuica (pronounced tz'WEE-kah).  It is a clear plum liquor that some travelers call "Romanian White Lightning".  Romania's soil is ideal for fruit trees, and produces more plums than any other European country.  The majority of the plum harvest is used for ţuica.  As elsewhere in The Balkans, the custom was to down a shot on an empty stomach, before a meal.  It burned my throat, not unpleasantly.  In a moment, I was overcome by the stunned euphoria of someone who wakens from sleeping too long in the hot sunshine. 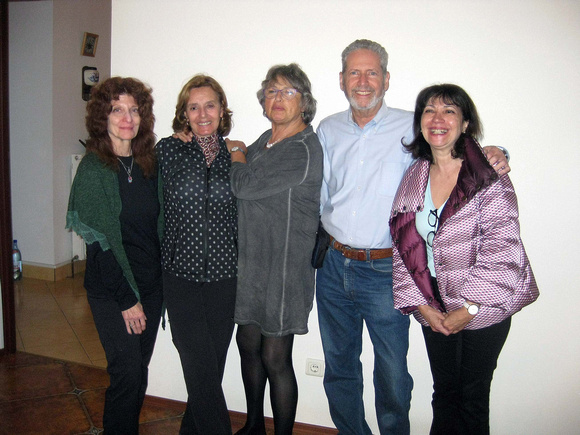 Some of us revelers, post-ţuica

For a while, I remained sunken into a corner of the couch, unable to do more than grin.  We stayed at Simona's as long as possible, eating, drinking, and laughing.  We sang and danced a little, fond and nostalgic, as we tend to be at our too infrequent reunions.  Two days were too few to be with my friends. 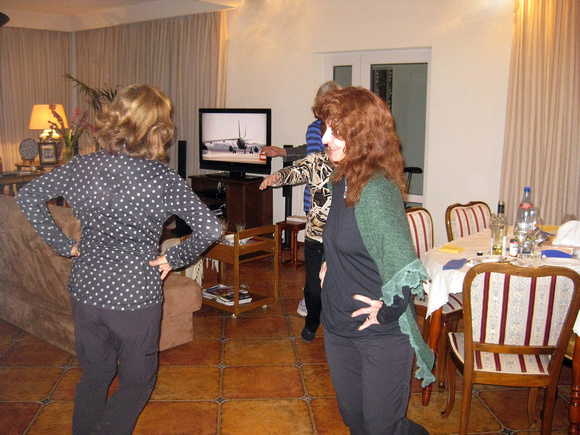 I was as reluctant to leave them as I was grateful for my extraordinary luck in having been able to meet them in Bucharest.  And two days were too few to be there.  I could have toured Romania happily for weeks.  Three of us would return to Israel, and four to The States.   I could not predict when I might see them again.  HL and I would leave for the airport in a matter of hours, and land in a place that had all but ceased to exist for us.  Once back, I would remind myself that Jupiter, bestower of good fortune, is the ruler of my horoscope.  Then I could begin to envision another improbable adventure.