Next on our itinerary was a full day of sailing, which had given me pause before we booked the cruise.  I had thought that I might become anxious while restricted to the ship as it went more than 130 kilometers down The Danube.  The ship's cruising speed was rather too leisurely to suit me.  And we would have to pass through a series of locks, slowing us down considerably.  As it happened, I was glad of a day to rest, because I had a troublesome cold.  I had caught it at the beginning of the voyage, and developed a persistent cough.  I was hoarse, losing my voice for hours at a time.  Sometimes I was feverish.  HL had a milder case of the same respiratory ailment.  Many of the crew and passengers had similar symptoms, though I was unlucky enough to have a worse case than most.  The laryngitis was especially vexatious.  I remained in bed, skipping breakfast, and missed the first hours of the sailing. 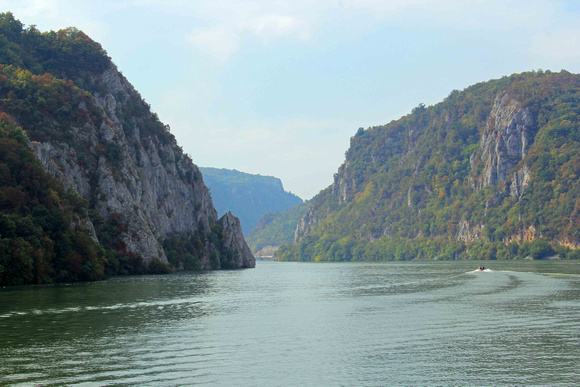 When I climbed onto the upper deck, the weather was warm.   The ship was sailing through a rocky gorge.  We approached the Iron Gates under a hazy sky.  On The Danube's southern shore rose the hills of Serbia.  To the north, we had our first sight of Romania.  Limestone cliffs rose hundreds of meters above the water, jutting from the steep, forested slopes on both sides.  The border between the two countries was in the middle of The Danube.  The scenery was a magnificent as the ship's crew had assured us that it would be.  One of the crew broadcast commentary from the wheelhouse.  The guides circulated among those on deck, augmenting the crew members' descriptions with their own remarks.  People clustered in the bow, taking pictures or simply admiring the view.