The Danube River carried our ship through the deepest gorge in Europe.  Aside from a few craft sailing upriver, there were few traces of civilization.  Both Serbia and Romania had created national parks on their sides of the gorge.  I was content to commune with Nature as the river wound south.  I should not, however, call the landscape unspoiled.  It had been altered drastically by a series of dams that had made the Lower Danube navigable.  Before that, the gorge had been infamous among boatmen for its submerged rocks, rapids, and cataracts that had obstructed shipping.  The Romanians had called that stretch of the river The Cauldrons.  It was not until the 1970's that the first of a series of locks was completed, a joint Serbian-Romanian project.  The dams that tamed the river and provided hydroelectric power had flooded the gorge, raising the water level by more than 35 meters.  An entire island had been submerged.  Eventually, more than twenty thousand people were forced to relocate to higher ground.  Upriver from the first dam, all the way back to Belgrade, The Danube had become as much an enormous lake as a river. 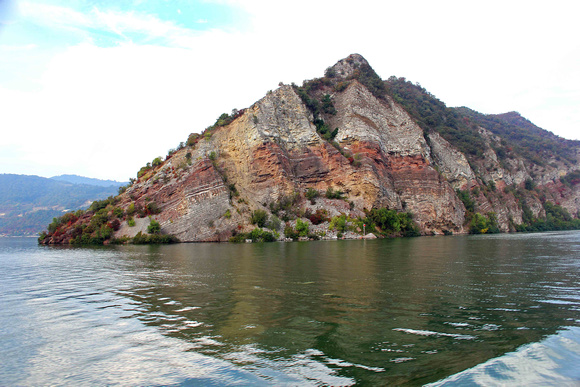 Our daily printed agenda had alerted us to look for the Tabula Traiana, a Roman monument carved into the rock two millennia ago.  It was on the Serbian side of the defile.  The Emperor Trajan had overseen the erection of a bridge over The Danube to link Roman roads.  It enabled the legions to conquer Dacia, the kingdom that the victors renamed Romania.  Trajan had his accomplishment commemorated on a plaque carved into the rock, so that future generations would learn of his military glory.  The lettering was incised into a rectangle about four meters wide and two meters high.  The Tabula would have been underwater if the dam's engineers had not raised it to safety in its present location.  It was an engineering feat that the ancient Romans would have appreciated. 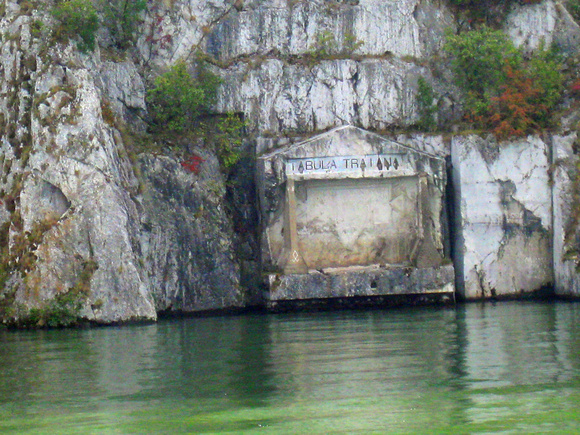 Trajan's Tablet, a Roman Monument from the Second Century