On the Romanian shore was another monument, the titanic head of the Dacian ruler, Decebalus.  Decebalus fought a series of wars against the Romans, winning some before he was defeated definitively by Trajan's army.  At forty meters high, the hero's statue was the tallest rock carving in Europe.  The part of the outcropping above the chieftain's massive countenance was shaped into a conical cap.  The sculptors had given Decebalus a severe expression.  His wide, stone eyes glared at us as the ship went past.  Anyone who has seen advertisements for European river cruises is likely to have had a glimpse of the Dacian king, scowling in the background above a gorge. 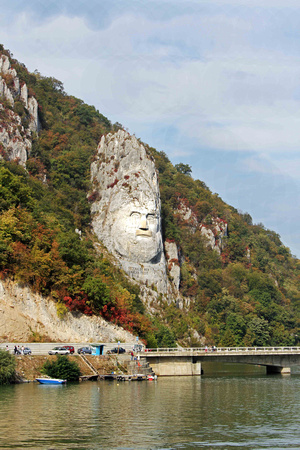 The Decebalus relief does not date from antiquity, as one might suppose, but from the last decade of the Twentieth Century.  A Romanian entrepreneur named Dragan commissioned the work.  The ambitious Dragan wrested his riches from the wreckage of Comunism.  His brand of romantic nationalism inspired his tribute to the Dacian hero.   For five years, a team of sculptors had dynamited the cliff, shaping it with a series of controlled explosions.  Then they had labored for at least as long again to carve the monarch's features.  Lest there be any doubt about the source of the colossal donation to Romania, the relief included a Latin inscription, legible from quite a distance.  It read Decebalus Rex -- Dragan Fecit  (Decebalus the King -- Made by Dragan).

Another place of interest on the Romanian side was a small monastery, the reconstruction of a late medieval one that had been demolished and rebuilt repeatedly over the course of 500 years.  The latest iteration of the Mraconia Monastery dated from 1993.  Its predecessor had been inundated once the dams were completed.  Part of the monastery stood atop a concrete boathouse, and I thought about how isolated it must have been before an inland, modern road had been extended to reach it.  Only a few monks were in residence.  Wide steps led from the water's edge to the white church, one with three dark-tiled domes in the Romanian eclesiastical style.  Atop the central dome and the pair of smaller domes on the bell towers were shiny, gold-toned crucifixes.  The river lapped incessantly at the base of the picturesque compound, which resembled a toy model of a monastery even before it began to dwindle from view. 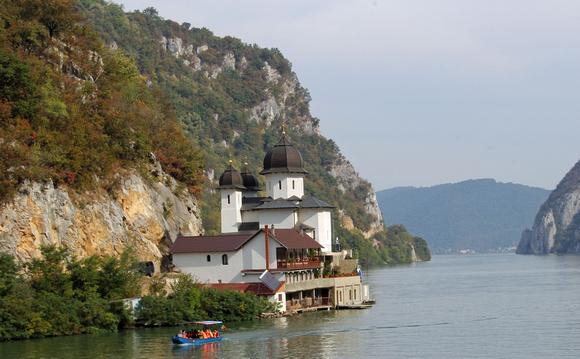