Current Events 53: Through the Locks

Our ship entered the first lock at noon.  Iron Gates I was the site of the first hydroelectric dam to supply power to both Serbia and Romania.  Constructing it had taken twelve years.  The lock had four chambers.  It was one of the largest in the world.  The ship began to drop as soon as the lock's gates swept shut behind it.  The mechanical sequence that propelled the ship through the lock was slow, yet fascinating to witness.  The gate that had admitted our craft soon sank beneath the water.  Overhead, the power lines hummed.  When we went to lunch in the dining room, all that was visible through the windows were the sides of the lock.  We descended through concrete strata, and I kept staring through the glass despite my incipient claustrophobia. 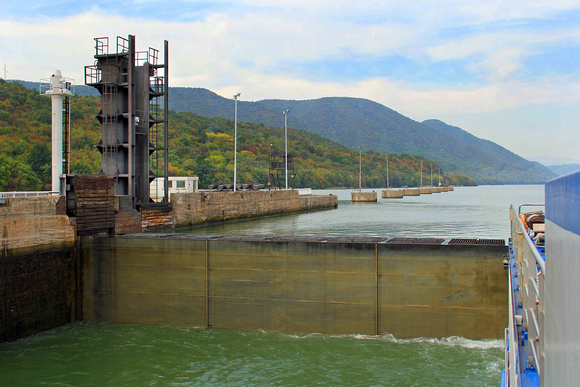 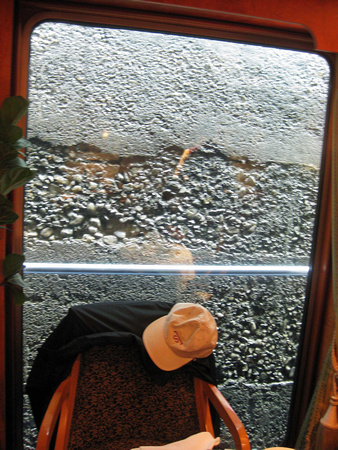 Dining Inside the Lock

Since we were spending the entire day sailing, HL and I signed up for a tour of the galley.  That revelation of the culinary choreography relieved that afternoon's sense of confinement.  The Slovakian executive chef allowed a dozen passengers at a time into his immaculate, stainless steel domain.  His minions and he demonstrated how they conjured three elaborate meals a day for two hundred people from a kitchen and pantry area smaller than a living room  in an average North American home.  The cooking crew had only nine seconds to fill and garnish each plate before a waiter carried it to the dining room.  I was impressed not only by the speed, but also the unremitting nature of the labor.  No sooner had the staff cleaned the kitchen than it was time to start preparing another meal.  The consistently high quality of the food on board ws even more laudable after I had toured the galley.

Towards evening, the ship entered the second lock, Iron Gates II, some 50 kilometers from the first lock.  The second dam had been built in 1984.  The Sun was low as we proceeded towards the dam, and the play of the cliffs' shadows and the light on the river's surface was hypnotic.  The ship had to be lowered about 14 meters in each lock, and traverse the same distance, 300 meters, before emerging on the river once again.  Going through the second lock was no longer a novelty, but it was still worth standing on the top deck to watch it again.