On the morning after our passage through the Iron Gates, the ship docked in Bulgaria.  The river port of Vidin was in the extreme northwestern part of the country, a narrow hook between Serbia and Romania.  On a map of The Balkans, the borders of the countries look as if they were drawn by a toddler who had binged on sugar prior to picking up a crayon.  Our guide, Radi, was more effervescent than ever.  Beaming, Radi said that she was proud to be showing us her beautiful native country.  All of the local guides, as well as the four who traveled with us throughout the cruise, had waxed equally rhapsodic about their nations.  To their credit, the guides maintained a professional neutrality when they discussed other cultures.  Yet each belonged to a specific geography, and did not question his or her attachment to it.  I could never know that kind of certainty or comfort.  I had been too young when I left the city of my birth, and had not dwelled anywhere else long enough for any place to feel like home.

Bulgaria was terra incognita to me,  even more than its bellicose neighbors.  The Ottomans had vanquished and then ruled Bulgaria until 1878.  Bulgaria had been aligned with the losing sides in both World Wars.  Towards the end of the Second World War, Bulgaria changed sides and welcomed the Russians, their Slavic brothers responding to a common foe.  After the installation of a Communist government in 1944, Bulgaria became a Soviet satellite.  In the post-Soviet era, the Bulgarians were not as sentimental about The Communism as many Serbs seemed to be.  They could not fail to be conscious, however, of their loss of security in the free market (sic) economy that had replaced their highly centralized one. 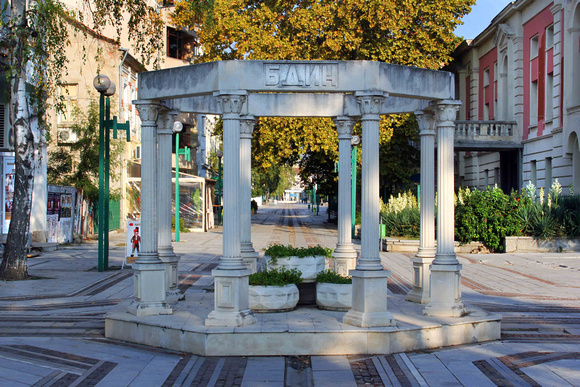 Vidin was not without charm, though it was evident that the town had seen better days.  At the quayside where we disembarked was a dirt-streaked white gazebo with the name "Vidin" inscribed on it in Cyrillic letters.  The streets were paved in a geometric red brick and pale concrete, but they were grimy and, in some places, missing bricks.  The Neoclassical faҫades of mansions, apartment blocks and hotels were cracked and in need of paint.