Current Events 57: The Faces of the Dead

The Bulgarians have a custom that I had never encountered anywhere else, and it was in Vidin that I was introduced to it.  The local people printed the pictures and names of their deceased relatives on sheets of paper, the size of computer printer paper, and posted them around town.  People pinned these Memento mori  to metal, cork-lined frameworks placed on street corners for this express purpose.  Dozens of the dead gathered in two-dimensional form, the sheets pinned so their edges aligned to form a macabre sort of wallpaper. There was not enough room on the bulletin boards for all of the funerary handbills, however, so some were affixed to lamp posts and tree trunks.  There was a standard layout, with a formula of farewell and the departed one's name on top.  Each page bore a passport-style photograph, with the relevant text in Bulgarian below the portrait, and a crucifix in the upper left corner.  We saw only one page with a Star of David in the corner, on a notice that a woman named Gittel had, presumably, been gathered to her ancestors. 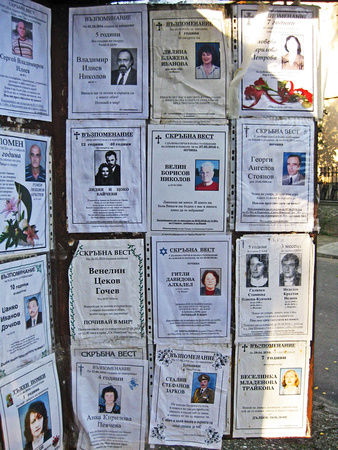 I was unabashedly fascinated by these obituary notices, known as Necrolog.  In Bulgaria, the dead are not gone.  Their visages offer all who pass the promise of love and redemption.  When people died, their families posted these notices at the graveyard, the church, and wherever else they chose.  They might mail them to distant kin.  A Necrolog might list only the dates of birth and death,  or include the cause of death.  Some Necrologs addressed the defunct loved one, often in verse.  Some who composed the Necrologs signed their names, or identified themselves simply as The Bereaved.   A Necrolog will be posted not only after someone's demise, but also forty days later, then at three-month intervals for the next year or so.  After that, the practice is to post one only once a year per decedent.  At that juncture, the Necrolog becomes very similar to the Yahrtzeit, when Jews light a candle to mark the anniversary of a relative's death.