Bulgaria had been a formidable kingdom during the early Middle Ages.  A remnant of Bulgaria's former might was the fortress of Baba Vida, Vidin's principal landmark.  According to legend, Vida was one of three daughters of a Bulgarian king.  After their father's death, each of his daughters inherited a third of the kingdom.  Both of Vida's sisters wed ill-starred noblemen who lost their wives' patrimony in wars.  Vida, however, did not marry, choosing instead to devote herself to her subjects' welfare.  Thus she became the Baba Vida, or Grandma Vida,  the mythic protectress honored in the name of the citadel. 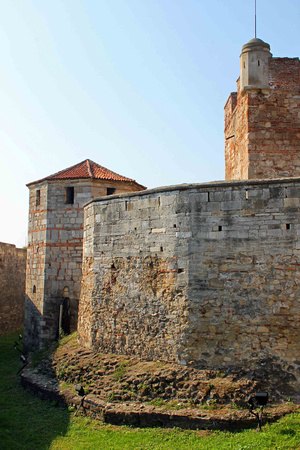 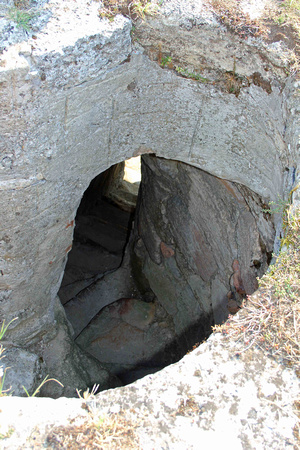 Baba Vida was preserved in its entirety, making it unique among Bulgaria's medieval castles.  The Turks had demolished most of the others when they occupied The Balkans.  Baba Vida's site was another of those that the Romans and, later, the Celts,  had fortified.  The bastion that we toured had four square towers and a double ring of curtain walls.  Construction began in the Tenth Century.  The stronghold was completed in the Fourteenth Century, and was the rulers' residence during the brief existence of the Tsardom of Vidin.  Baba Vida was still an effective defense six hundred years later, when the Austrians modified it to accommodate gunnery emplacements.

In prior ages, the moat would have contained water instead of grass.  The passages between the oppressively thick stone walls would not have been silent, especially near the cells for prisoners.  As we walked through Baba Vida, we could understand how the fortress had withstood numerous sieges.  Not all of it was accessible, and some of the staircases required tight turns and sound nerves.  We climbed to the ramparts and looked out over The Danube, which angled sharply at Vidin.