As we walked from Baba Vida back towards the town center, I heard a riot of barking and growling.  Suddenly, a pack of dogs bolted down the street in pursuit of a car.  Vidin had not taken the sort of stringent measures to reduce its stray canine population that Belgrade had done.  Radi cautioned us not to approach the dogs where they stood, panting, after their automotive prey escaped.  Our guide said that the dogs were not really dangerous, though their running after cars did create a nuisance.  She disliked imparting anything that might foster a negative opinion of anything Bulgarian.  Humane societies throughout the country were addressing the problem, Radi assured us.  Her husband and she, for example, had adopted a dog from a shelter.

The dogs had distracted me so that I had not noticed an imposing, derelict structure across the road until we had drawn abreast of it.  Behind a fence topped with barbed wire was the ruin of the Vidin synagogue.  Its image remains the single most indelible one of the entire trip.  I see it dreaming and waking, and when I am trying to fall asleep.  Once, it had been a splendid edifice, one of the largest synagogues in Bulgaria.  It was erected in 1894, in the Neo-Moorish style of the Dohanyi Synagogue in Budapest.  It had four towers and two tiers of paired, arched windows through which we could view the sky, as the synagogue had no roof.  Trees had taken root in the inner courtyard, and vines had grown over the faҫade.  Tangled foliage spilled from the lower windows, and tree limbs protruded from the upper ones.  The bricks had lost most of their covering layer of stucco. 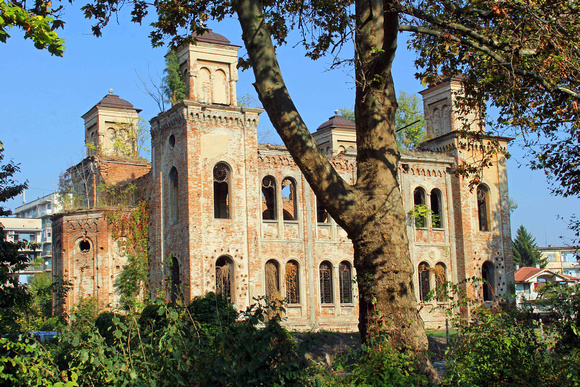 Convenient as it would have been to regard the Vidin Synagogue as a poignant symbol of the doom of European Jewry, that would not be accurate.  Rather, the tale of its abandonment was one of the mutability of Fortune and the ineptitude of Eastern European bureaucracy.  Franz K., do I hear you chuckling, again?  Allow me to explain, in my next post.