Radi was pleased to disclose the reason for the Bulgarian Jews' escape from the Nazis' extermination camps.  Though his country had been aligned with the Axis powers, King Boris of Bulgaria had resisted Hitler's demand to surrender 50,000 of the king''s Jewish subjects.  King Boris traveled to Germany in order to express his defiance in person.  A few weeks later, King Boris died of an apparent heart attack.  At the time, the Bulgarians, as well as some German officials,  believed that the king had been murdered with a slow-acting poison.  The Third Reich was known to employ such means to assassinate important enemies.

It was not until I had returned to The States and done some research that I learned that Radi's account of royal heroism was, at best, an oversimplification.  King Boris became a German ally in order to reclaim territory that Bulgaria had been forced to cede to Romania and Greece after the First World War.  When the Nazis occupied those areas, they offered them to the king in exchange for his fealty.  Part of the price was the enforcement of a Bulgarian version of the Nuremberg Laws that legitimized the persecution of the Jews.  King Boris, however, was an uncooperative partner, as he was reluctant to commit his troops to fight the Soviets.  That must have irked Hitler and his high command.  King Boris' eleventh-hour refusal  to yield the Jews of Bulgaria would have guaranteed a death sentence.  The boxcars were waiting in railyards throughout Bulgaria.  And King Boris already had countenanced the deportation of 20,000 Macedonian and Romanian Jews from his reconstituted realm.  They perished in Treblinka and Majdanek.  Technically, they were not Bulgarian Jews.  King Boris was not so intent on preserving Jewish lives as he was on asserting his sovreignty.  He had not realized how dangerous that would prove to be. 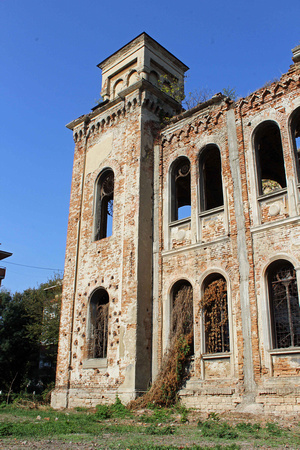 When Vidin's Jews erected their synagogue in 1894, their community was thriving.  Bulgarian Jews had been granted civil equality and a high degree of integration into the fledgling nation's economy.  Once, the ruin had been the grandest of Vidin's five synagogues, with crystal chandeliers commissioned from Vienna.  In the 1940's, The Nazis seized and plundered it.  They used the building for storage.  After the war, the Soviets' client Communist government discouraged religious expression.  The Jews saw dim prospects for their future in the Soviet bloc.  After 1948, most Bulgarian Jews emigrated to Israel.