After the Jews' departure from Vidin, the vacant synagogue deteriorated.  In the 1970's, the Ministry of Culture drew up plans to restore the building for use as a center for the arts.  Work began in 1983 and was still in progress six years later, when Communism ended.  The timing could not have been worse.  Workers had just removed the roof.  There was no one to authorize replacing the roof during the chaos that followed the dissolution of the Soviet bloc.  The funds for restoration had disappeared with the commissars.  Open to the elements, the roofless synagogue became a ruin unsafe to enter. 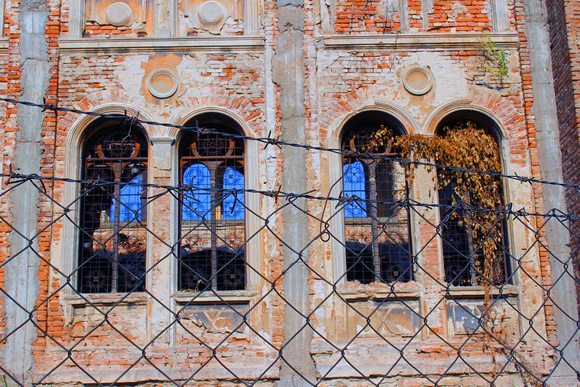 Despite its deplorable condition, the Vidin synagogue was still beautiful.  I was tempted to enter it, as much to stand there for a few, silent moments as to explore the littered interior.  That was not possible, as the parade of our fellow travelers already had left HL and me behind, but I knew that I would be writing about it.  And the abandoned synagogue inspired one of my New Moon paintings.  I add to this series each Rosh HaShanah , the resumption of the cycle of the Jewish year.  Unlikely as it seemed as I peered through its empty casements, the synagogue might yet be restored.  Many of the major attractions in Eastern Europe had been reconstructed from rubble since the Second World War.  If the Jews of Bulgaria could be saved, in defiance of the odds, so, too, might the Vidin Synagogue. 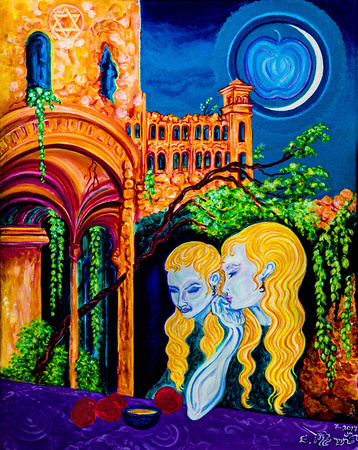