I was feeling ill when I awoke on the morning that we docked in Nikopol.  The Aria had sailed there from Vidin while I slept.  My throat was sore, and I had developed laryngitis.  We were not slated to tour Nikopol, another port that the Romans had fortiifed. Instead, our destination was the medieval capital of Bulgaria,  Velikovo Tarnovo.  It was about 90 kilometers south of The Danube, an hour's ride by bus on narrow, twisting roads.  The bus climbed as we rode.  The seat of the ruling dynasty of the Second Bulgarian Empire was in the Stara Planina, or Balkan Mountains, the range that gave the peninsula its name.  The Second Bulgarian Empire arose in the Twelfth Century, when its founders rebelled against their Byzantine suzerains.  That polity lasted about three hundred years, until the Ottoman Turks conquered it.  Tsarevets, the royal citadel, sat high above the Yantra River, on a series of ridges.  The Ottomans had beseiged the citadel for three months before they breached its defenses.  We could distinguish its crenellated walls and arched gates from quite far away, grey against the green hills, as the bus wound towards the fortress. 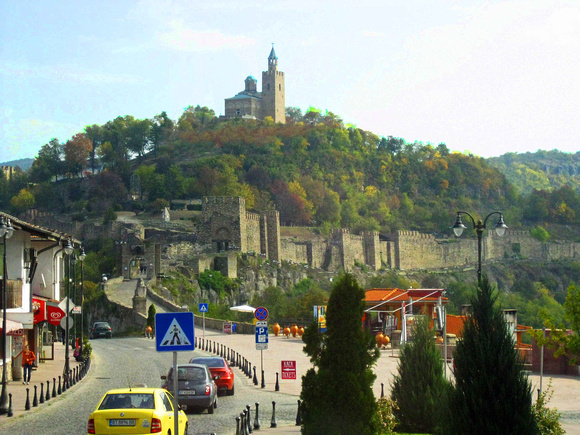 The Tsarevets Fortress was a combination of ruins and restorations.  A bridge over the Yantra gorge led from the fortress to the town, formerly named Tarnovo, or Tarnograd.  A stone heraldic lion resting its paw on a shield guarded the entrance to Tsarevets.  The handsome gates, bridge, and carved feline guardian had all been refurbished.  Most striking was the stern grey fortification called Baldwin's Tower.  There was a legend that Tsar Kaloyan captured the noble Flemish Crusader, Baldwin.  Baldwin had made himself the Latin King of Constantinople.  Baldwin was supposed to have died in his prison.  It was an ignominious end, as are so many in East European lore.  Remnants of palaces, churches and houses dotted the hill behind the gates.  Atop the hill was the rebuilt Patriarch's Complex, surrounding an intact church with a tall steeple.  We did not have time to walk to the summit of the hill because we had to return to the bus and proceed to Arbanassi. 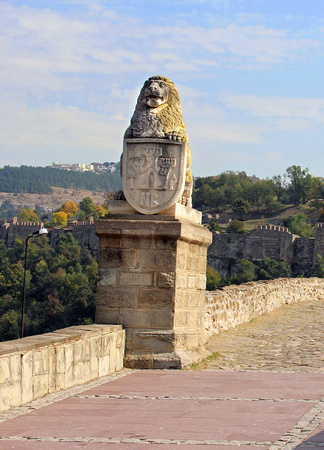