Velikovo Tarnovo's population was close to 70,000.  Velikovo,  meaning "great", had been added to the name in 1908, when it was designated the capital of an independent Bulgaria.  The adjective remained part of the city's name even after the seat of government moved to Sofia, the present capital.  Velikovo Tarnovo was one of the few places in Bulgaria that was experiencing population growth.  It boasted a university, a military college, and an Old Town.  Arbanassi was much smaller.  Arbanassi was only four kilometers from Velikovo Tarnovo, but most of the distance was vertical.  There was a scattering of vacation villas and rustic hotels on the mountaisides.  It was evident that the area was developing into a resort for foreign as well as Bulgarian tourists.  There were signs in English and German advertising lodgings and gift shops.  Arbanassi turned out to be a gentrified hamlet completely dependent on tourism.

It had not always been so small a settlement.  In the Eighteenth Century, it had become a trading center, after a series of revolts had won Bulgarians a measure of autonomy from the faltering Ottoman Empire.  The affluent merchants in Arbanassi built grand houses in what became known as Bulgarian Revival style.   In addition, they financed the construction of five churchs and a monastery.  Arbanassi's wealth drew brigands, who raided the town repeatedly.  Outbreaks of plague further exposed the town, which was pillaged and burned.  Its inhabitants fled to Romania or Greece.  Arbanassi dwindled in importance until its current revival.  Today, there are a few hundred ipeople living there, operating guest houses, retaurants, and handicrafts shops.  Our group stopped to tour The Merchant's house Museum.  It was a structure with a fortress-like bottom story of heavily mortared  stones and recessed, slitted windows.  The upper story was more gracious, made of wood, with many windows. 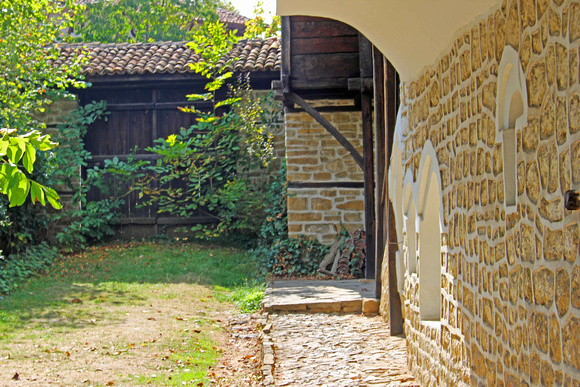 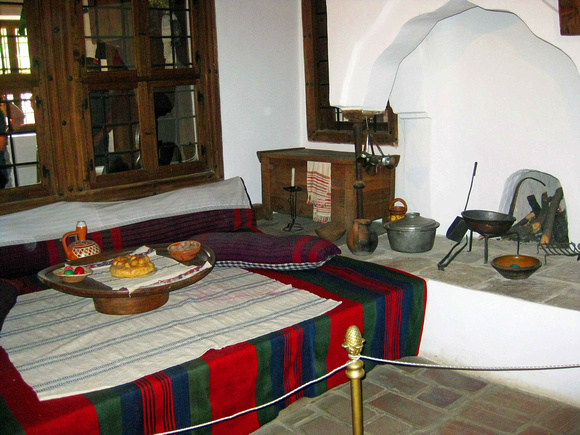 The merchant family's quarters reflected Turkish influence, with low platforms for sitting and sleeping, covered in richly colored rugs.  Red and pine green were the dominant hues in the textiles that brightened the whitewashed rooms.  Some rooms were reserved for the household's women, most notably the birthing room and nursery.  The interior of the Merchant's House looked comfortable, even luxurious, in contrast to its rough outer defenses.