Our guide, Radi, introduced the next attraction as remarkable, and advised us to have our cameras ready.  We filed into a modest church dedicated to the Archangels Michael and Gabriel.  From the outside, it could have been another merchant's manor.  Inside, the walls and the entire barrel-vaulted ceiling were covered with stunning frescoes.  On a dark background representing the heavens, the brilliantly pigmented figures of saints and angels were everywhere we turned, their golden haloes and wings glowing.

A young woman with close-cropped hair was our guide to the church.  She held forth in passable English on the church's origin during Arbanassi's heyday, early in the Seventeenth Century.  The Orthodox merchants had donated funds to decorate their new church as lavishly as possible.  They had hired icon painters from other parts of Bulgaria and Romania to render the holy images in the medieval style.  There was a splendid iconostasis, painstakingly restored, as were the frescoes.  The profusion of precisely colored figures was dazzling, in complete contrast to the church's rude stone walls.  To avoid risking the ire of their Muslim Turkish rulers, the Arbanassi merchants had left the church's exterior plain. 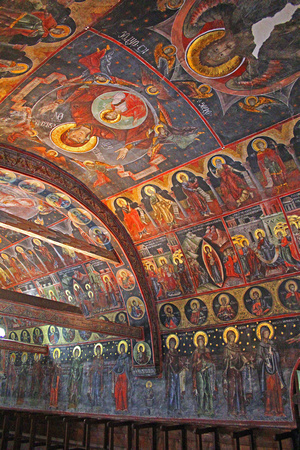 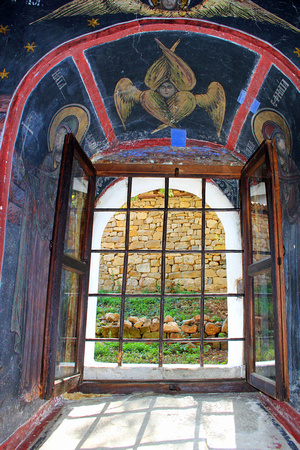 Here I admit that I was unable to pay much attention to the guide's speech.  There were no seats in the church, and I was very tired.  My throat was sore and my chest tight.  I was about to leave in search of a bench when four monks filed in to stand in front of our group.  They began to sing.  The quartet was dressed with ecclesiastical elegance, in black cassocks with scarlet piping.  Their a cappella performance was as much chanting as singing.  The monks harmonized in a sonorous language, presumably Church Slavonic.  One of the four voices was considerably lower than the other three, a contrabass, a distinctive feature of Eastern Orthodox liturgical music.  I had a fit of coughing and had to leave the church, rather than interrupt the concert.  Radi brought me a glass of water.  She told me that the four singers were professional vocalists, not monks.   I might have guessed that, had I not been distracted by my cough.  I liked thinking that we tourists were providing some income, however modest, for Bulgarian musicians. 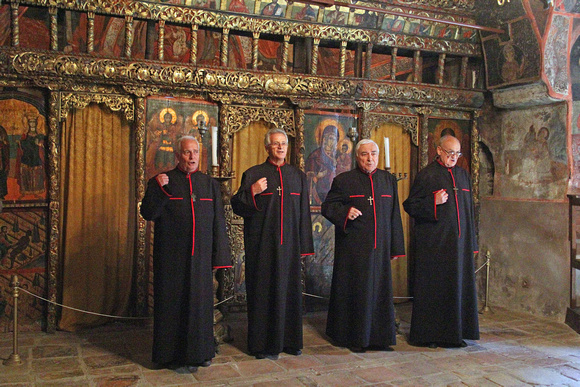