Though there was an excellent highway from Ruse to Varna, two hundred kilometers was a long ride in a bus.  Radi's spirits were not dampened by the morning's overcast skies and cool temperatures.  She was delighted that she would be able to introduce us to her home city.  She was hoping that she could have us meet her husband, a Serbian man to whom she had been married for only a year.  And we could meet her dog, apparently the winner of Varna's canine lottery.  Radi donned a traditional Bulgarian costume for the bus ride.  It was a long red dress, embroidered with white flowers.  The costume enhanced the darkness of her eyes and the formidable whiteness of her smile.  She distributed little cellophane packets to all of the members of our group.  Each packet contained tassels made of yarn, red and white, like Radi's frock. 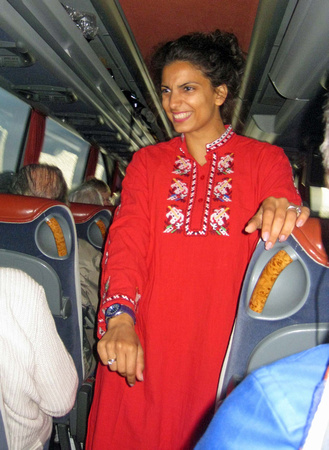 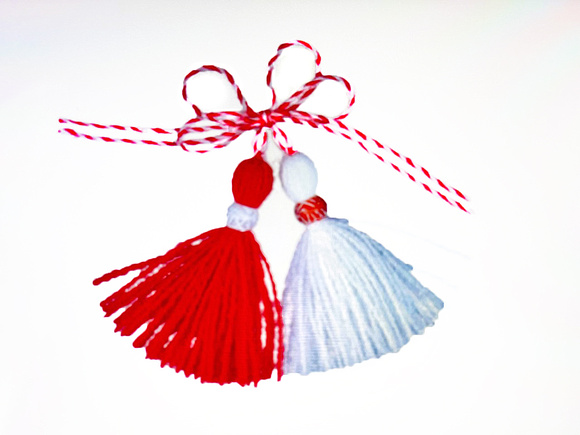 Radi explained the significance of her gifts:  they were martenitsi, exchanged by Bulgarians on the first of March, a festival called Martenitsa.  One can acquire a martenitsa only as a present.  Relatives and friends give dozens of them to one another.  Bulgarians pin them to their clothes or wear them on their wrists from March first until they see a migrating stork or swallow, or a tree in bloom.  This is meant to encourage Baba Marta, a cantankerous, mythical crone who personifies the cold weather, to relent and let Spring arrive early.

Once one has observed the first sign of Spring, he or she ties the martenitsa to the limb of a tree.  Or one can place the martenitsa beneath a stone, and wait for small creature to crawl near it.  A worm or insect might be auspicious, or a spider might signify bad luck.  Bulgarians associated white with strength and purity, and red with love, good health and fecundity.  I did not need to be an ethnographer to guess that festooning the flowering trees was a vestigial fertility rite.  Bulgaria's population did not shift from the villages to the cities until relatively late, when the Communist regime compelled many peasants to become industrial workers.  So the charming atavism of exchanging martenitsi survived.  It may have become even more entrenched with the resurgence of nationalism throughout the former Soviet bloc.