Current Events 68: The Gold of Varna

Our bus halted at Varna's Archeological Museum.  The museum was in a Neoclassical building from the 1880's that had been a girls' high school, or gymnasium.  Within a few years of the school's opening, it began its transformation into a museum, thanks to the efforts of a pair of brother polymaths, the Skorpils.  Both Herman and Karel Skorpil were amateur archaeologists.  They were Czech by birth and education.  After Ottoman rule ended in 1878, the Skorpil Brothers became teachers in Bulgaria.  They funded their own excavations all over the country, and founded Varna's archaeological society.  A bronze sculpture in front of the museum paid tribute to the brothers who had brought much of Bulgaria's buried history to light. 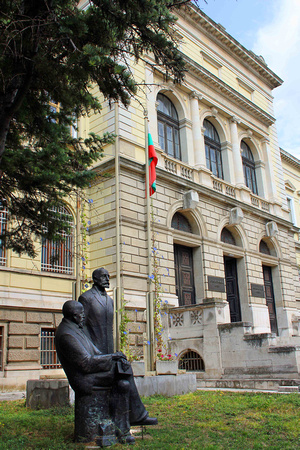 The state-owned museum housed an extensive collection of artifacts, from the prehistric through the Roman, Byzantine, medieval and Ottoman periods.  Its most famous exhibit occupied three halls.  This was the Gold of Varna, the earliest trove of golden objects ever discovered.  The treasure had been in a necropolis containing graves from a Copper Age civilization that had flourished in the Fifth Millennium BCE.  It was uncovered in 1972, when the foundations for a factory were being dug in one of the city's industrial zones.

The skeletons of dozens of men and women were recovered from the site.  Those on display had been reassembled in the poses in which they had been unearthed.  Most of the jewelry adorned only a few men, indicating an early social stratification.  The precious metal had been fashioned into disks, bracelets, beads, collars, diadems and penis sheaths.  The Chalcolithic craftsmen who made the jewelry may have been Europe's first goldsmiths.  In all, more than three hundred gold items had been removed from the necropolis. 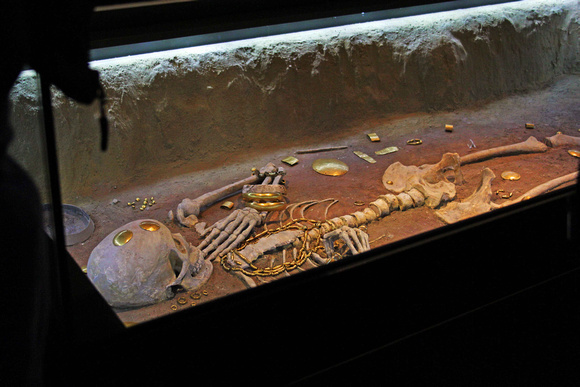 One of the male skeletons was likely to have been that of a king or high priest, as the precious grave goods in his burial were the richest and most numerous.  His finger bones held a rudimentary scepter, an axe handle wrapped in sheets of beaten gold.  The gold shone as brightly against the bones as it must have on the day that it was buried.   Only it had not been buried.  It was, in fact, not gold; the museum exhibited only replicas of the artifacts.  Even the bones were substitutes, made of plastic.  I did not hear about that until much later in the trip.  It did not matter.  At the time, I believed that I was peering at the Gold of Varna and was suitably awed by its antiquity.  Had the pieces been the originals, I dare say that they would have looked just the same to me.