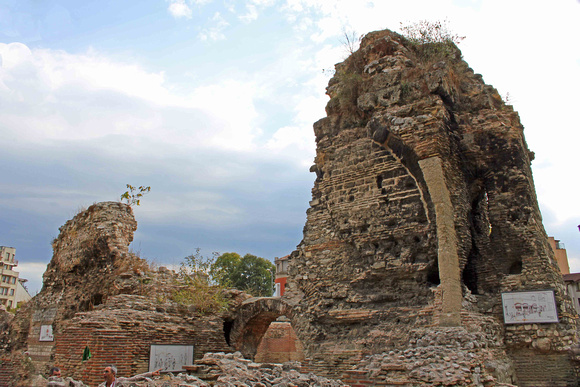 In Classical times, Varna was a Greek trading colony called Odessos.  Successive empires realized the value of the Black Sea port and left their traces in its soil.  Perhaps most visible were the Thermae, the ruins of the Roman baths.  The Romans ruled Odessos for centuries, incorporating it into their province of Moesia.  Varna's Thermae were among the largest in Europe.  The Skorpil Brothers had done some of their excavating there.  The Archeological Museum admministered the site, and the admission price helped to fund the preservation of the ruins.  The cost of the tickets was money well spent, as we could pass freely from one section of the massive bathing complex to another, admiring the ancient brickwork at close range.  Parts of it formed twisted towers, like the stumps of immense teeth.  Arches supported vaulted colonnades that were more than twenty meters high.  There had been chambers for hot air and a series of pools containing water at various temperatures.  The Roman engineers had been able to channel local mineral springs into the baths.  Portions of the plumbing system lay exposed to view, as well as some of the vanished structures' foundations.  Though the sky above the ruins was cloudy, the scene was a serene rather than a melancholy one.  With modern multiple dwellings overlooking the Thermae, Varna seemed to be embracing its lengthy past. 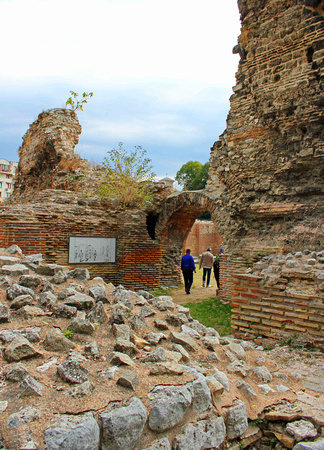 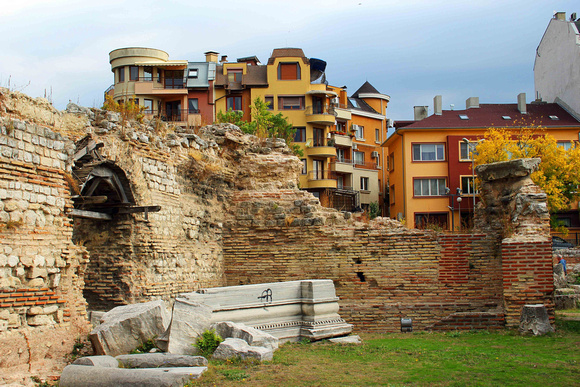