The Cheap Sunglasses Tour, 6: Inside the Fly's Eye

The outdoor exhibitions at Crystal Bridges closed after sunset, officially.  I meant to hurry but I could not, my progress along the path arrested by some of the interpretations of Architecture at Home.  Five architects had been asked to erect full-size prototypes of affordable dwellings.  The results were more ideologically provocative than practical.  It was a temporary installation, due to be dismantled a few weeks after we saw it.  That seemed fitting to me, as did the one permanent placement among them.  The Fly's Eye Dome was one of Buckminster Fuller's last designs.  It was a variation of the geodesic dome that the futurist Fuller popularized as a solution to the housing shortage after the Second World War.  HL and I were drawn to sit inside it in the gathering silence, as the departing museum visitors made their way to the parking lots. 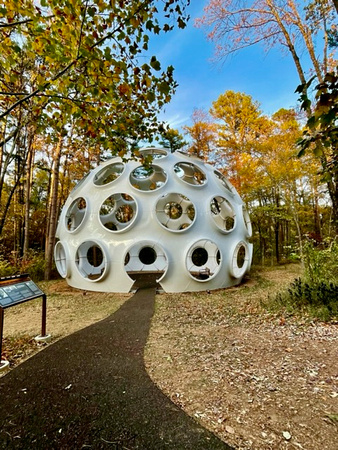 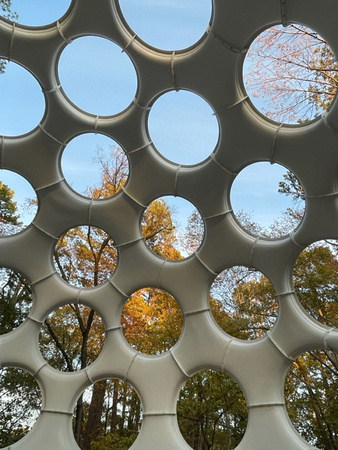 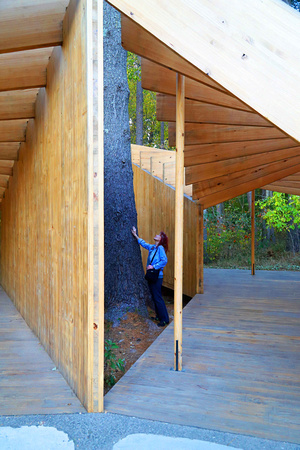 This prototype, by Stella Betts and David Leven, was a tree house that I had to pause to explore.

Buckminster Fuller's fame had ebbed by the end of the Twentieth Century.  In contrast, the architect Frank Lloyd Wright retains his renown.  The Bachman-Wilson House is an example of Wright's residential style that was relocated to Crystal Bridges' grounds.  When flooding in New Jersey threatened the house, its owners sought a safer site for it.   The house was taken apart and reassembled  atop a slight rise in the Arkansas woods. 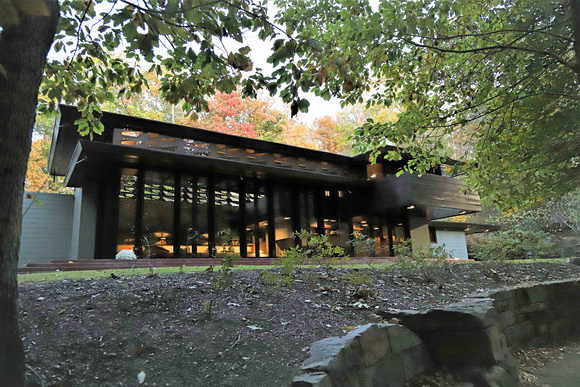 The Bachman-Wilson House was closed.  We could not have taken pictures inside even if it had been open, as interior photography was prohibited there.