The next day's weather forecast proved accurate, and the sky was laden with charcoal grey clouds.  I was grateful to HL for having suggested that we view Crystal Bridges' exterior exhibits on the previous evening.  It was already drizzling when we entered the museum.  Admission to the permanent collection was free, though we did have to buy tickets to a temporary show about fashion.

The first examples of American art that greeted me were 18th Century paintings of some members of a New York Jewish family, the Levy-Franks.  They were attributed to Gerardus Duyckinck.  I learned that Duyckinck, a descendent of Dutch colonists, had been a successful portraitist patronized by the former Nieuw Amsterdam's wealthy merchant class.

I can understand the reasons that the general populace tends to overestimate the number of Jews in the world.  A disproportionate number of my co-religionists have risen to prominence in a myriad of fields.  There have been accomplished, influential Jews in every era, flourishing despite our dispersion across the globe.  So I was only mildly surprised when my very distant relatives gazed tranquilly back at me from the gallery wall. 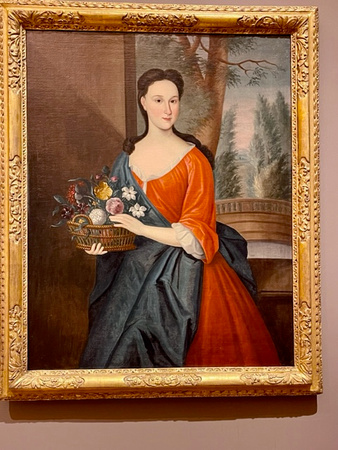 This painting is believed to depict David Franks and his wife, Richa. 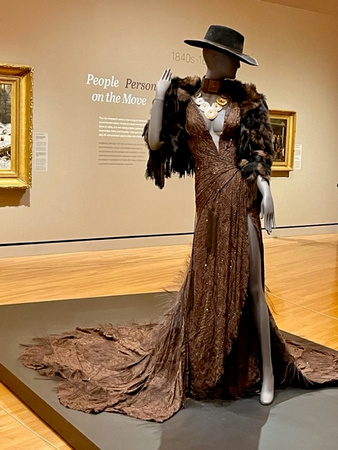 This evening dress was designed by Ralph Lauren,  another Jewish connection