Fisherman's Bastion is a Neo-Gothic terrace affording views of The Danube.  Its turrets and archways are ideal backdrops for wedding pictures as well as tourist snapshots.  HL photographed its reflection in the façade of what had been a modern Hilton Hotel, opened in 1976.  This Hilton had been the sole Western-style hotel  in Budapest during the Communist regime, the only place where foreign travelers might count on a supply of hot water almost as reliable as the ubiquity of surveillance. 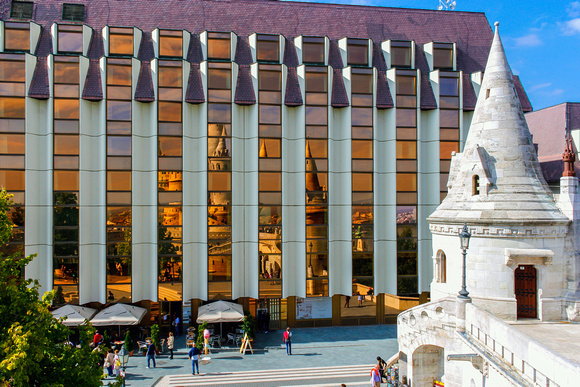 Once everyone had returned from buying marzipan at a shop opposite Fisherman's Bastion, our bus driver stopped near Heroes' Square.  Everyone dismounted from the bus to listen to a bewhiskered man in a suit.  Radi introduced him as Tamas Lederer, a professor who had organized his own relief efforts to aid the Syrian, and other, refugees who streamed through Hungary in 2015.  Though most were en route to Germany, where asylum and, presumably, jobs awaited them, some had been stranded in Hungary.  These were the infirm, plus those who had fallen ill or been injured or robbed, so that they found themselves destitute in a strange country.  Professor Lederer had encountered one hapless family and given its members food.  They could communicate their plight because Lederer and they spoke English.  Hungarian is unrelated to other European and Levantine languages, and is impenetrable to all but native speakers and the most dedicated of students.

Later, Lederer and his friends had provided blankets and medicine for the transients.  Neither the Hungarian government nor the Red Cross had recognized the refugees encamped in train stations, under bridges, and on the streets.  They were ineligible for any of the very few beds available in official aid centers.  At the height of the crisis, Lederer and his cohorts were helping seven thousand Middle Eastern refugees taking shelter in a single Budapest train station. 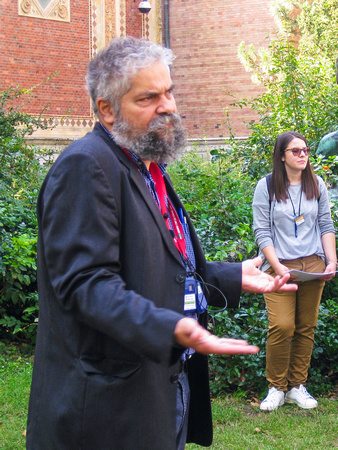 Professor Lederer did not regard his activities as heroic.  He was quite modest, as people whose compassionate acts arise from their innate decency tend to be.  Not all Hungarians are xenophobic.  Yet the country had balked at accepting thirteen hundred refugees, the number that the European Union had decreed that Hungary could absorb.  The right-wing regime in power had filed suit against the European Union, condemning the policy of resettling migrants.  Repeatedly, Prime Minister Orban had rallied Hungarians to protect their Christian culture against Muslim inundation. And his popularity is not waning.  Indeed, it seems to be increasing, darkening the current political scene with the shadows of Hungary's past persecutions of its minorities.

While Professor Lederer answered questions from our group, HL walked around, shooting pictures.  At a little remove from the bus, HL glimpsed a homeless man, prostrate on the ground under a soiled blanket.  Later that day, we observed a few men with battered suitcases on the riverbank, below the Liberty Bridge, on the steps leading down to The Danube.  The smell of burning wood had attracted my attention.  The men had ignited some broken tree limbs to make a campfire.  Budapest had quite a few people who were not, it seemed, benefiting notably from the end of Communism. 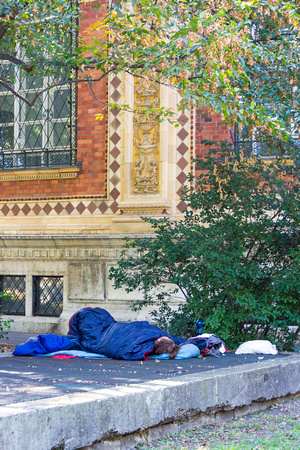 Dreaming of the New Economy

Dreaming of the New Economy 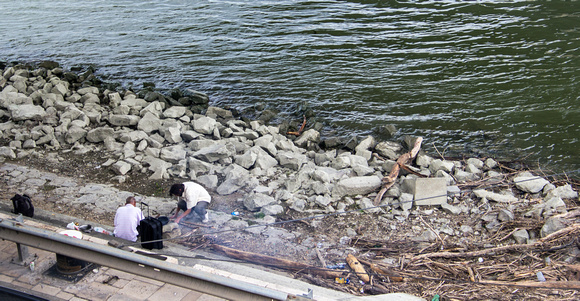