I think that I know why there was an initial delay in obtaining K.'s diagnosis.  At first, it seemed inexplicable.  Sick as K. was when she was when she was hospitalized in December, she was fully conscious.  She was able to answer questions about her medical history, repeatedly.  Multiple scrub-clad Myrmidons recorded that K. had been treated for leukemia between the ages of two and five.  There was no attempt at obfuscation.  In fact, K. was quite clear about the nature of her childhood affliction.  Yet the oncologists were loath to say that K. was suffering a relapse.  It was as if they had placed an outside limit on the amount of time for that, and it was a small fraction of forty years.

It was two days before the doctors reached a consensus about the results of the battery of blood and bone marrow tests that K. underwent upon admission.  They decided that she did have ALL, Acute Lymphoblastic Leukemia, after all.  If that qualifies as a pun, consider it intentional, as well as representative of the current tenor of my humor.  K.'s principal oncologist opined that her illness was a new case of the same, or a very similar, type of leukemia as before.  The convolutions of medical taxonomy would do credit to a medieval theologian attempting to measure a pinhead's angel-holding capacity. 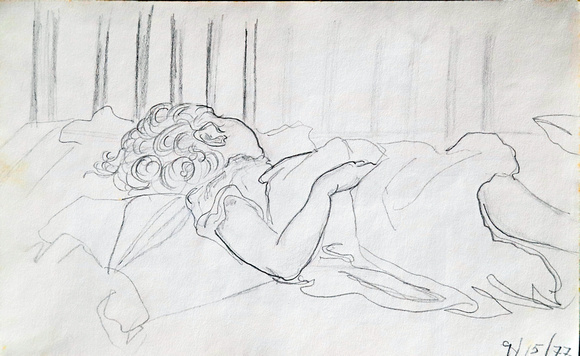 My sketch of K., two years old, in her hospital crib

The forty year gap that bewildered and excited K.'s doctors may be unprecedented.  At the very least, she could be the subject of an article in a medical journal.  Were I a physician, K. would look to me like a monograph on two legs.   If any of you enterprising readers has discovered another case like hers, please write to me about it.  True human anomalies are rare, so K. is unlikely  be alone in confronting this oddly serial misfortune.  It is I, not K., whose fate could be unique.  Has any other parent had to care for a child with juvenile leukemia and then do it again when her daughter is middle-aged?

While I do not equate my sufferings with hers, I am the one who remembers K.'s first course of treatment, the diminutive girl limp in bed, hooked to an I.V., or struggling in vain with nurses and doctors to escape another puncture of her flesh.  Now the images that had almost ceased to haunt me are as vivid as the harshly lit corridors of another hospital in another city, in another century.  I am poised between past and present, in a way that no one else may have been before me.  I can assure you that this is a distinction that I have not sought.