In his bestselling book analyzing the 2008 financial crisis, N.N. Taleb designated cataclysmic, unpredictable events as Black Swans.  The evocative term has since passed into the language.  I think that K.’s leukemia qualifies as a Black Swan, for me as well as for her.  A few days ago, I may have encountered what I shall call a Grey Swan, that is, something unexpected and potentially crucial for our family, though lacking in global import.  It happened in the office of K.’s oncologist.  Dr. M. spoke at length about the course of K.’s future treatment, and offered her a choice that we had not known existed. 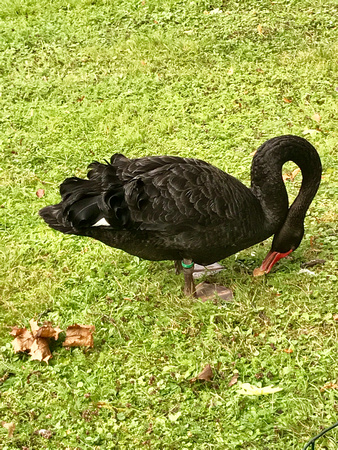 For the first time, the oncologist described a bone marrow transplant in some detail.  Were K. to receive one to cure her leukemia, she would need to be hospitalized for a month.  That would be only after a compatible marrow donor had been found, no simple matter.  And her body would have to accept the donor’s marrow.  K. would have to recuperate for months after her release from the hospital.  That would entail her ingesting numerous medications daily and seeing the doctor at least three times per week.  The danger of infection would be constant, and isolating.

There was an alternative, available to K. based on her particular genetic profile.  Dr. M. had discovered that she had several “favorable trisomes”.  These made K. a good candidate for maintenance on oral medications, after an additional fifth round of chemotherapy in the weeks to come.  The survival rate was the same, he asserted, for patients who had undergone the less drastic therapy as for those who had been given marrow transplants.  The oncologist seemed to be addressing HL and me, her parents, rather than K., who was sitting on a treatment table behind him.  Perhaps he realized that we should be the ones to explain this new option to her once we left the office.  At first, I had some difficulty comprehending what he had said.  The idea that K. might be spared the misery of the transplant process made the light in the room go dim, and then brighten almost unbearably.  I must have been holding my breath as I listened to Dr. M.

I gathered my wits enough to ask Dr. M. which of the two treatments he would recommend.  He replied that he would abide by the patient’s choice in such cases, since the odds for success were the same.  It took mere moments for K. to decide that she would prefer additional chemotherapy, and would avoid a transplant if possible.

Today is the Vernal Equinox, the end of a hard Winter.  Between now and the end of K.’s treatment, there could be many revisions to the medical protocol.  I understand that there are many variables, and few certainties. Swans of any color may appear.  It is conceivable that some could bear bright plumage.