Exploring beautiful Kalemegdan Park in its entirety would have taken all of the time that our tour had allotted for Belgrade.  In addition to the Upper and Lower Towns of the fortress, the park contained a zoo, an art gallery, a Roman well, a clock tower, medieval ruins and modern monuments.  Stone staircases connected the terraces, where shade trees lined sinuous paved paths, with fountains and sculptures around every turn.  Dominating all was the statue of The Victor, rising about fifteen meters above the Upper Town. 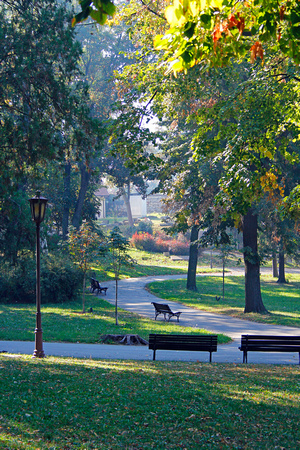 The Victor, or Pobednik in Serbian, had been erected in the 1920's to commemorate the Serbs' final defeat of the Turks.  The Victor is a bronze male figure on a column.  In one hand, he holds a sword with its tip planted in the ground.  On his other hand he carries a falcon.  And he is nude, presenting his genitalia to one side of the city while displaying his muscular buttocks to a different district.  The Victor's eminent masculinity had scandalized the Belgrade bourgeoisie.  The statue was supposed to be part of a much more elaborate civic installation, one that had been too expensive for the impoverished Kingdom of Serbia to have completed between the World Wars.  Torn between patriotism and prudery, the citizenry agreed to the present conspicuous placement of the statue on its column.  Ever since, the Victor, clothed only in verdigris, has become the symbol of Belgrade. 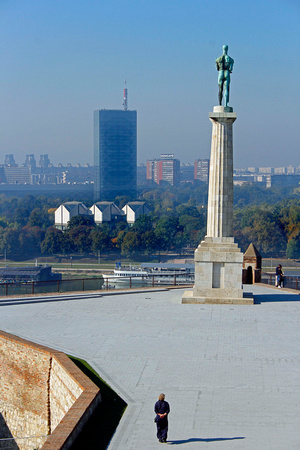