In the synagogue courtyard stands a monument to the Swedish diplomat Raoul Wallenberg.  It acknowledges Wallenberg's courageous efforts to enable Jews to survive the Nazi occupation while he was the Swedish consul in Hungary.  The courtyard is named Wallenberg Memorial Park.  In it there are tributes to other heroic non-Jews, designated Righteous Among the Nations.  No one knows how many Jews they rescued.  Wallenberg alone saved tens of thousands.  The figures are at once staggering, and meaningless. 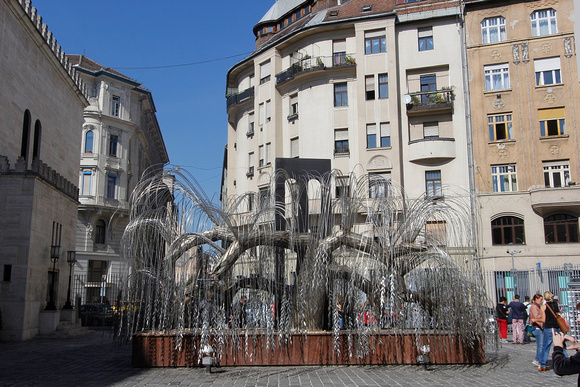 The numbers and letters carved on stone were stark, the legions of victims reduced to abstractions in the sunlit courtyard.  Instead, my eyes sought the gleaming, chromed steel sculpture of a weeping willow tree.  The Hungarian sculptor, Imre Varga, finished the massive piece in 1991.  The tree has seven branches, like a menorah.  Incised on the surface of each lanceolate metal leaf is the name of one of those Jews who perished in the ghetto.  The Tree of Life is common in Jewish iconography, but I have not seen a more arresting treatment of it.