Current Events 20: A Concert in Osijek

One of our destinations in Osijek was an elementary school, where the students regaled us with a concert.  The tour company's owners fund a charitable foundation that gave the school a grant, and the tykes were going to sing, and play, for their supper.  We guests filed into a low concrete building decorated with metal panels in primary colors.  There were tempera paintings on the walls.  We were conducted to rows of folding chairs in an assembly room.  Children and their teachers awaited us.  We might have been in an elementary school anywhere in The States, had not every face been pale, every outfit neat, and every back straight.  The girls and boys were as rosy as if they all had just been scrubbed.  The teachers' glances silenced a communal murmur of excitement, and then the program began. 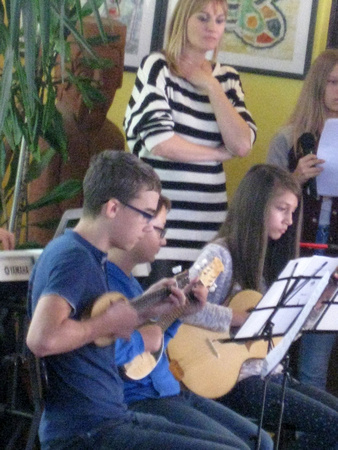 Almost all of my fellow passengers were grandparents, and not a few had been teachers.  Some had mentioned volunteering with organizations that benefit the young of the species.  Paige was among them, as I learned when we had introduced ourselves on our first night on board the ship.  That morning's juvenile choral and instrumental performance might have been the highlight of the trip for them.  I was not as appreciative.  I listened to some of the selections but nodded off during others.  The children sang and played adequately, and a few soloists demonstrated undeniable talent. Rising early to submit to the stare of disgruntled Hungarian border agents, plus riding on a bus, had caused my somnolence.  And I had caught a cold.  It might have been the decongestant tablet that I had taken to control my symptoms that tipped me into sleep.