Thanks to our guide Radi's accurate directions, we were able to find the main synagogue in Novi Sad.  In 1905, the Jewish community erected a fine synagogue in the Secessionist style, of ocher brickwork accented with white.  Novi Sad was part of Hungary at the time.  The congregation was comprised of Hungarian-speaking, Neolog Jews.

There had been four earlier synagogues on the same spot on Jevrejska, or Jewish, Street.  The latest one had a central cupola and a pair of towers topped by octagonal domes flanking the entrance.  Carved above the portal was a Biblical quotation in Hebrew, which we translated as This is a house of prayer for all the nations.  To one side stood a Jewish school, and on the other an administrative building.  Both were built in the same handsome style as the synagogue. 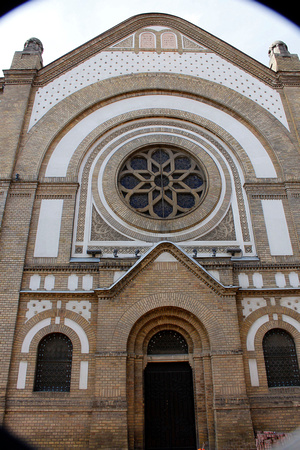 Until 1941, Novi Sad's 4,000 Jews had enjoyed the same rights as other Serbian citizens.  Those who were not massacred by Hungarian Fascist militia were deported to death camps when the Nazis occupied Serbia.  About 1,000 Jews survived.  As became the pattern in Eastern Europe, many of those survivors moved to Israel after 1948.

So there are too few Jews remaining in Novi Sad to maintain the synagogue complex.  The school became a ballet academy.  The municipal government reopened the synagogue as a concert venue, after leasing it from the dwindling Jewish community.  We had hoped to look inside the building, but it was locked.  Later, I learned that it housed a congregation only on the major holidays.  The street in front of it was under construction, and the synagogue probably was being renovated.  Or there was simply no one there to admit us. 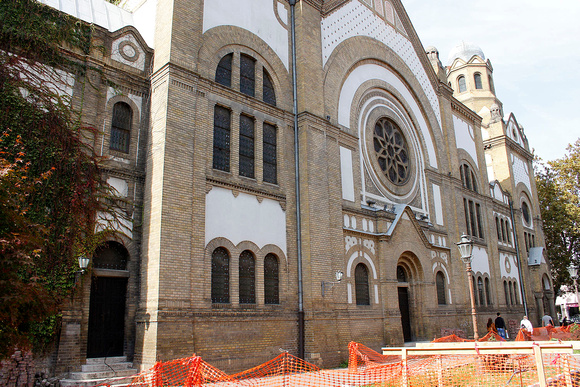