Current Events 31: The Eyes of Petrovaradin

We were given a choice of activities in Novi Sad, and we elected to ascend the hill to Petrovaradin.  Two of the guides, Irina and Stefan, conducted those who wished to tour the fortress through a shabby section of town.  The guides said that in Novi Sad were many people who were unemployed and displaced by war.  They had crowded into the houses in a formerly decent section.  The apartments in the partitioned two- and three-story townhouses had been intended for military veterans, who paid a subsidized rent.  No one was visible on the narrow, cracked sidewalks or in the windows.  The guides hurried us through the streets to the base of the hill. 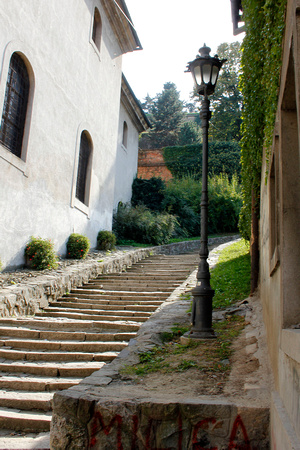 A staircase led us to the site of the fortress.  There were few in our party.  Walking through subterranean passages is not to everyone's taste, though I had been looking forward to it ever since I had learned of Petrovaradin's existence.  The fortress had been a formidable element in the Habsburg defense on the Lower Danube.  Before the preserved fortress rose on the site, there had been a series of outposts there, including a Roman fort, a medieval monastery, and a Turkish bastion.  There was archaeological evidence that people had appreciated the strategic advantages of the location since the Neolithic era.

Near the entrance was a landmark clock tower, known as the Drunken Clock.  Its long hand marked the hours instead of the minutes, while the short one marked the minutes.  There are several explanations for this, all fascinating to those who advanced them.  Some claimed that the anomaly aided fishermen who had to read the clock's face from a distance.  The clock was reputed to run more slowly in cold than in warm weather.

Near the Drunken Clock was a surrealist installation of a giant human face, with two painted eyes suspended above a metal nose made of angled metal, lacquered bright red.  It might have been paying homage to the famous optometrist's billboard in The Great Gatsby.  Or it may have been just one of many local artworks.  Novi Sad is the cultural capital of Serbia.  Since 2000, it has attracted an international audience to the EXIT music festival, held every Summer at Petrovaradin.  The festival had its genesis in the Balkan students' protest movements. 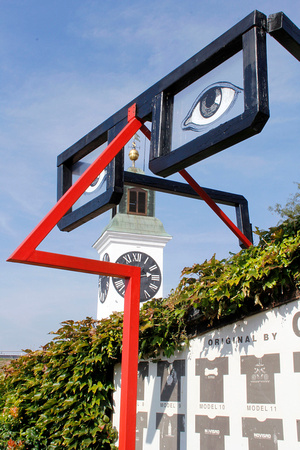