After the guides from our ship gave us our tickets, they delivered us into the care of an official Petrovaradin tour guide.  We surmised that the tour company was loath to assume direct responsibility for our safety in the tunnels.  The Austrians had enlarged the conquered Ottoman stronghold so that, by the end of the Eighteenth Century, it enclosed more than a hundred hectares within its brick and stone ramparts.  There were sixteen gates and emplacements for 400 cannons.  Even more remarkable than the thickness of the walls or the size of the area within them were the intricate underground defenses. There were four levels and sixteen kilometers of tunnels beneath the citadel. 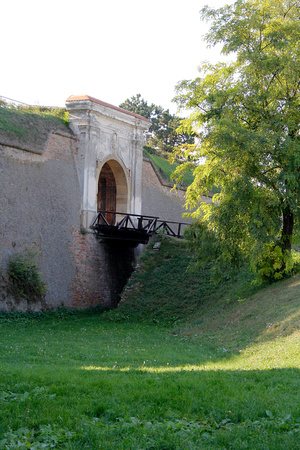 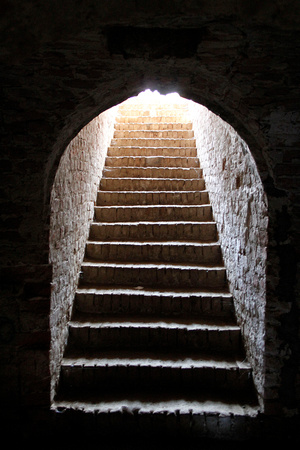 Any force that managed to mine its way under the walls would be trapped where the Austrian soldiers could lie in wait.  Sappers would have had no easy time getting near the keep, but it had been a possibility.  We trailed close behind our guide, as grateful for his flashlight as his familiarity with our route.  Some sections could be reached only with ropes that dropped through narrow rectangular shafts.  We were restricted to those levels accessible by stairs, and that was fine.  It was enough of a challenge to to avoid a misstep on the uneven floor.  It had required months for soldiers to be trained in the intricacies of this dank brick honeycomb. We passed chambers not only for munitions but also for subterranean troop quarters, complete with kitchens.  Soldiers would be billeted there regularly.  At intervals along these passages, there were vents that admitted a little daylight and would have allowed the smoke from candles, torches and cooking fires to escape. We emerged from the depths of Petrovaradin footsore and thirsty.  We had lemonade at a cafe on a broad twrrace overlooking the river.  Serbian lemonade is not sweetened, and my palate never adjusted to its sourness.  The drink did reinforce my impression that the Serbs were tough folk.  We sat at a table shaded by umbrellas to admire the view of the city.  The hazy Sun hung over the Fruska Gora Mountains and silvered the surface of the water.