From Novi Sad,  the tour group traveled by bus to a traditional Serbian restaurant for dinner.  During the ride, there was still adequate daylight for us to see the harvested fields and orchards.  As happened often in Eastern Europe, we drove into the past when we left the city.  When we reached Salas 137, the illusion of moving backwards in time was complete.

We were conducted down a concrete path that led between several long, low farm buildings.  Cats, dogs and chickens ambled past us on their obscure errands, unperturbed by a few busloads of strangers.  Outmoded agricultural implements lay beside the path.  Wooden butter churns and troughs stood next to the door of the restaurant.  It was the newest structure on the property.  With its high, pitched roof and exposed beams, it resembled a barn.

The restaurant was a family enterprise.  The owners had bought it from some farmers.  They continued to raise some of the produce and animals that they served.  The rest came from local sources.  The original farmhouse and some the outbuildings had been restored so that they looked as they might have in the 1930's.  Salas 137 was also an inn, with thirteen guest rooms, all with old-fashioned furnishings.  It was a popular place for a weekend in the countryside.  There was a stable full of handsome horses, too.  The premises could be rented for parties, meetings and receptions.  The horses could be harnessed to wooden wagons for those who fancied being photographed seated in authentically agrarian discomfort. 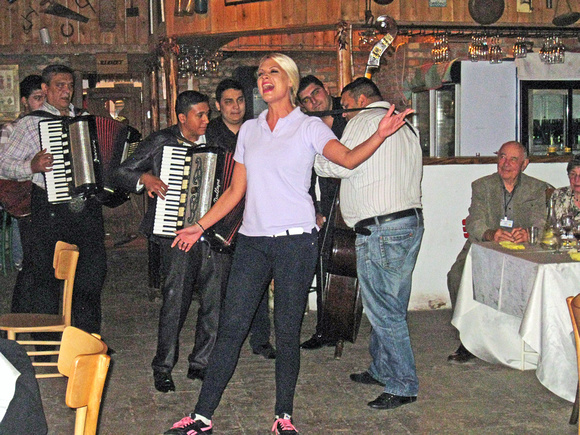 Diners from Novi Sad as well as tourists filled the spacious restaurant.   The cuisine was traditional Serbian, meaning mostly meat heaped on platters for all at the table to share.  Wine and rakiya flowed.  A band purported to be comprised of Gypsy musicians entertained us.  Serbia has a sizable Roma minority, but the musicians were no swarthier nor shorter than other Serbians.  The platinum hair of the girl vocalist may have owed more to artifice than to heredity, but she, too, was tall and robust.  I assumed that the lyrics of the folk songs told of love and longing, and battles won and lost.  For all I knew, however, the singer could have been hurling imprecations at us foreigners and our country of origin.