I suppose that HL and I could not have been the first vegetarians to dine at Salas 137, but there cannot have been many.  After our tour guide conferred with a burly, white-shirted manager, HL and I were given a grain-based dish.  It was palatable, if quite heavy.  By the time that we received our special entrees, we had partaken of the salads and other vegetable dishes that had been served to everyone.  We had little appetite for our main course.  And I was noticing that the rakiya was not burning my lips so much anymore.  Perhaps the local firewater had scarred them by then.  In fact, I was finding the rakiya increasingly agreeable.

Salas 137's house specialty was roasted beef on skewers.  Our table companions pronounced the beef tough.  Though they devoured everything else, our fellow travelers left enough meat on the platters to feed a raiding party.  Being among the Serbs filled my mind with bellicose imagery.  There was something ferocious about them, as if the waiters' enthusiastic welcomes could change to war cries in an instant. 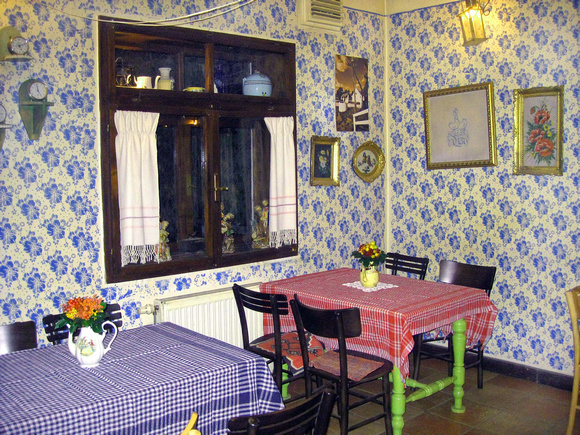 Feeling the need for a modicum of postprandial exercise, we strolled through the rooms of rustic antiques.  There were tiled heating stoves in almost every corner, as well as glass-fronted china cabinets, oil lanterns, dry sinks and obsolete appliances.  In one room were shelves that held parlor radios, each the size of a piece of luggage.  The light from the old electrical fixtures was as dim and yellowish as it must have been eighty years ago.  Despite that, HL lifted his camera gamely to record some of the details of our surroundings. 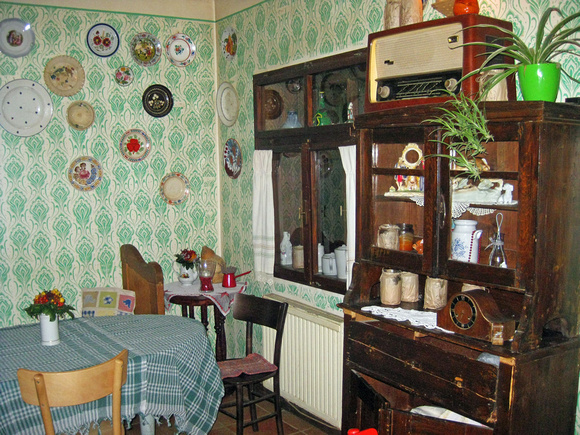