The money and time for the synagogue's renovation were well spent, as the results were spectacular.  The ceiling and walls were painted with geometric patterns, mandalas derived from eight-pointed stars.  The dizzyingly symmetrical designs were painted in buff, coral, crimson, white, and shades of blue, accented with gold.  As in Budapest's Dohany Street Synagogue, the underside of the women's balcony was decorated to match the walls.  Bucharest's Choral Temple possessed more of the trappings of Orthodox Judaism than the larger one in Budapest.  A line of white curtains ran down the center aisle, bisecting the ground floor seating area.   The curtains served as the partition between the men's and women's sections when there were few congregants at a service.  At times of high attendance, the women were restricted to the balcony. 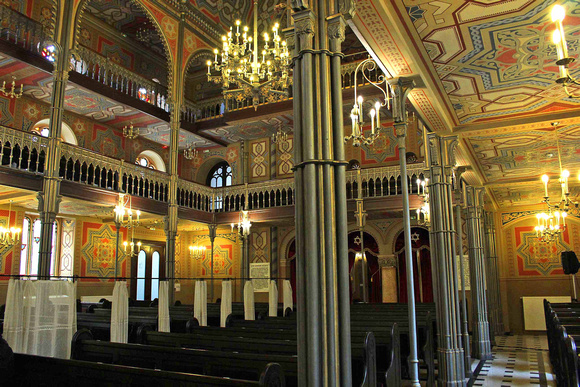 Simona had arranged for us to tour the synagogue with G., a friend of her son's, a young man active in the congregation.  G.'s English was fluent and unaccented.  Knowledgeable and earnest, G. wanted us to appreciate the Choral Temple within the context of Jewish history in Romania.  G. conducted us to a museum housed temporarily in a neighboring synagogue.  Before he left the Choral Temple, G. removed his knitted kippah and stored it in a pocket of his jacket.  HL  followed G.'s example.  Advertising one's Jewish identity was, evidently, still imprudent in Bucharest.

We walked a few blocks until we came to a building with smooth yellow walls.  It was the Great Synagogue, or Sinagoga Mare, dwarfed by the featureless concrete towers that hemmed in the street where it stood.  It had opened in 1847.  Ceaușescu had  ordered many synagogues and churches to be razed when he was redesigning the city.  It became official policy to surround those houses of worship that escaped the wrecking ball with high-rises notable for their stark Soviet monotony.  Only three synagogues remained in operation after the dictator's Systematization (sic), when he redrew the map of Bucharest to make room for monuments to his megalomania.